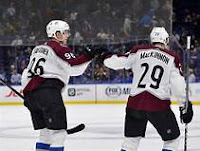 After a historically bad season, the Colorado Avalanche surprised everyone, finishing 4th in the tight Central division, and made the playoffs, led by Nathan MacKinnon's insane season, nearly winning him the Hart. They didn't change too much, but that's for the better. Let's look at some fast facts for the Colorado Avalanche.

Forwards: MacKinnon might not have a season like 2017-18, but he should put up at least 80 points, Mikko Rantanen could eclipse 30 goals. Alex Kerfoot, Tyson Jost and JT Compher are looking for good sophomore years. Vladislav Kamenev is entering his rookie season. Sven Andrigetto is an underrated winger.


Defenseman: Tyson Barrie had a great 2017-18, with 57 points in 68 games. Erik Johnson is still a decent top-4 defenseman. Sam Girard is young, but leads a shaky left side on defense, which Ian Cole was brought in fix. It's still a work in progress here.

Goalies: Semyon Varlamov is an underrated goalie when healthy, but that's the issue. They brought in Phillip Grubauer, knowing that Varlamov might go down. It was a smart move.

Playoffs: No
Division spot: 5th
Posted by Carter at 3:27 PM