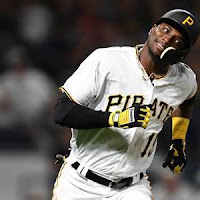 For the Yankees, Hechavarria is just fielding depth for late innings. He is one of the best defensive infielders in the league, and is one of those "defensive replacement" guys.

For the Pirates, Hechavarria is pretty much useless to them. They get some money for him, and a spot for prospect Kevin Newman to play. That's about it.
Posted by Carter at 9:44 AM