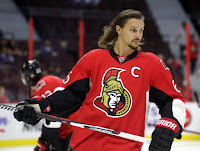 In a blockbuster trade, the San Jose Sharks acquired D Erik Karlsson and F Francis Perron from the Ottawa Senators in exchange for F Chris Tierney, D Dylan Demelo, F Rudolfs Balcers, F Josh Norris, a 2020 conditional 1st round pick, and a second rounder in 2019 and 2021.

For the Sharks, Brent Burns and Karlsson are arguably the top two defenseman in the game, at least offensively, and both are on their team. This is a great trade for them, and will be reflected on for years.

For the Senators, they need to rebuild, at that started with trading their captain, Karlsson. But, since he's just a rental, they didn't get as much as they should of. But, they still should've gotten more. Maybe Timo Meier or Tomas Hertl should have been in the package.

DeMelo, 25, scored 20 points, all assists, in 63 games for the Sharks last year. In his NHL career, all for the Sharks, DeMelo has scored three goals and 29 assists for 32 points in 133 games.

I think the Sharks win this deal. Karlsson is a superstar, and this isn't a superstar's return. The Sens really should have gotten more.
Posted by Carter at 4:10 PM