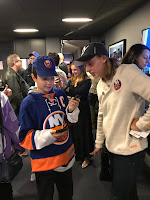 Only the greatest athletes in the world get to represent their country in the Olympics. On top of that, they all dream of winning a gold medal. I was fortunate to be able to speak with someone with five of them.

At the age of 21, American swimmer Katie Ledecky has already won five gold medals and a silver. One of those golds came in 2012 in London, at the young age of 15. The other four gold medals and the silver came in Rio 2016. She also has won 14 World Championship gold medals, the most ever by a female swimmer. She is the current world record holder in three events, the 400, 800 and 1500 meter freestyle. She has broken her own records so many times she actually has 14 of them.

I had the privilege to speak with Ledecky, who's uncle, Jon, is a co-owner of the New York Islanders.

Me: Did you play any other sports as a kid?
KL: I played basketball, soccer, I did Irish dancing. I did skate a little bit, but not seriously. Basketball, soccer and swimming for the three sports growing up.

Me: What's it like having your uncle as the owner of a professional sports team?
KL: It's awesome. When I was little I went to pretty much every Caps game, so I became a hockey fan really quickly. Now I'm a huge Islanders fan. I keep track of every game. My parents watch pretty much every game. It's fun to have a team to cheer for. I get to hear a lot of the stories about the team, different stories that my uncle has. It's a lot of fun to watch it and be a part of it, and to be able to come to some of these games when I get the chance.

Me: Will we see you in Tokyo (2020 Summer Olympics) in a few years?
KL: I hope so. It's very tough to qualify for the Olympics. There's the Olympic trials in June of 2020. That will decide if I get to go again. I'm training really hard for it. Hopefully I'll get to swim in a number of events in Tokyo and do really well. 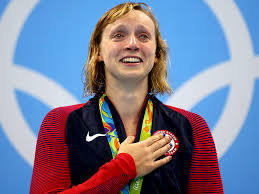