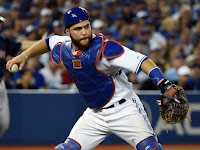 For the Dodgers, Yasmani Grandal left as a free agent, leaving them with Austin Barnes behind the plate. Martin started his career as a Dodger, making two all-star teams in 2007 and 2008. While he isn't the same player offensively, Martin is still a good defensive catcher.

For the Blue Jays, they are rebuilding. They released SS Troy Tulowitzki, and now out goes Martin. Martin was a big part of their 2015 team that made the ALCS. But, it was time to move on after a bad 2018. They get two prospects in return.