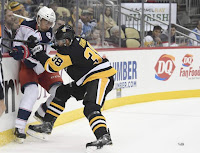 The Anaheim Ducks have acquired center Derek Grant from the Pittsburgh Penguins in exchange for forward Joseph Blandisi.

For the Ducks, they re-acquire Grant, who had a decent season on the fourth line for them in 2017-18, after bouncing around from team to team to start his career, and not scoring a goal for the first 86 games of his career. They trade Blandisi, who never got a big chance for them after coming over from New Jersey.

For the Penguins, Grant wasn't doing as well as expected after signing in the offseason. They get a player who was decent with the Devils before a trade to the Ducks, where he never got a real chance.

Blandisi, 24, scored no points in three games for the Ducks this year. In his NHL career for the Ducks and New Jersey Devils, Blandisi has scored eight goals and 18 assists for 26 points in 74 games.
Posted by Carter at 7:32 PM