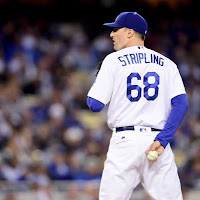 The Los Angeles Dodgers are used to winning. They've won six straight division titles. They've been to the World Series in back to back seasons. But, they still haven't won the fall classic in 30 years. In both 2017 and 2018, the fans saw the Astros and Red Sox celebrating at Dodger Stadium, while their team looked on. Only 10 teams make the playoffs, and two are immediately eliminated. So, the Dodgers have had a one in eight chance of winning the World Series for the last six years, but haven't come through. Will 2019 be the year they break through? Dodger fans hope, and the odds for that are good.

Rotation
It became apparent in 2018 that Clayton Kershaw wasn't the league's best pitcher anymore. He failed to qualify for the ERA title, with a 2.73 ERA in 161.l innings. He didn't get Cy Young votes for the first time since 2010, and didn't strike out at least a batter an inning for the first time since 2013. But, Kershaw got a partner in crime in 2018, with Walker Buehler finishing third in rookie of the year voting, with a 2.62 ERA and 151 innings in 137.1 innings. The Dodgers offered Hyun-Jin Ryu the qualifying offer after a 1.97 ERA in 15 starts, and he wisely accepted. At age 38, Rich Hill posted another solid season. Kenta Maeda saw bullpen time in 2018, but is still likely a starter. Former top prospect pitched in just four inning all season because of major shoulder surgery. He can return in the bullpen. There are two players on the Dodgers that may simply never get a chance. One is Ross Stripling, an all-star swingman who posted a 3.02 ERA in 21 starts and 12 more relief appearances.

Bullpen
Kenley Jansen's 3.01 ERA was the worst of his career, but he still made 38 saves, and should be healthy in 2019 after heart surgery in 2018. The team signed Joe Kelly, who was a big part of them losing to the Boston Red Sox in the World Series. Scott Alexander returns after pitching in 73 games in 2018. Pedro Baez had a 2.88 ERA. Both Urias and Stripling should make the bullpen. There are four more spots left in the bullpen. Dylan Floro could get one, after a 1.63 ERA in 27.2 innings. Caleb Ferguson and JT Chargois both pitched decent in decent time last year. That means the final spot is between lefty Tony Cingrani and righty Yimi Garcia, who both struggled in about 22 innings last year.

Catching
The star of this past offseason's catching market was Yasmani Grandal, the former Dodger catcher who signed an underwhelming deal with the Brewers. The Dodgers were set to go with Austin Barnes, who rivaled with Grandal in 2017 but struggled in 2018. But, they went with taking on Russell Martin's final season on a big deal he signed with Toronto. Martin, a two time all-star with the Dodgers from 2007-08, has seen his average plummet lately, and his power is slowing down, which shouldn't benefit off of Dodger Stadium.

Infield
2017 rookie of the year winner Cody Bellinger was the first baseman of the future, but for now, he's the right fielder. That's because Max Muncy arrived, a minor league free agent who hit 35 home runs in 395 at bats, but striking out 131 times. Kike Hernandez played some time in center and second base last year, and with Logan Forsythe being traded at the deadline for Brian Dozier, who walked in free agency, the second base job is his. He hit 21 home runs last season. Corey Seager wasn't too good to start the season, then missed the rest of 2018 due to Tommy John surgery. The team didn't miss him much because of the trade for Manny Machado, but they'll definitely take him back this year. Third baseman Justin Turner is the heart of the team. He led the club with a 4.5 WAR, and his .924 OPS was topped by just Muncy.

Outfield
Joc Pederson moved to left field while Hernandez and Bellinger played center. Pederson doesn't walk often, but had a career high .248 batting average in 2018, while hitting 25 home runs and cutting back on the strikeouts. Bellinger's home run total in 2018 dropped by 14 big flies, while getting more Plate Appearances, which is concerning. I mentioned earlier Stripling might never get a chance with L.A. Neither could Alex Verdugo. He is currently ranked as their second best prospect, and is 22. But, the team keeps on bringing in talent instead of trusting him, but they won't trade him, watching him dominate AAA. The team signed AJ Pollock, who has a decent power bat, decent speed, a former Gold Glover and has had an OPS over .800 in has last four full seasons, dating back to 2014. Andrew Toles missed a lot of 2018 but returns as the fourth outfielder.

Bench
Chris Taylor hit 17 home runs, playing second base, left field, center field and shortstop. But, he had a league leading 178 strikeouts. He moves to a super-utility role in 2018. Barnes is the backup catcher, with Toles as the fourth outfielder. David Freese can play both corner infield spots. He crushes lefties and fastballs. He was 8 for 24 in the playoffs, and hit .385 in 19 games after an August trade from Pittsburgh.

Steal of the Decade
Getting Chris Taylor for Zach Lee was a very good trade for the Dodgers. Taylor has hit 38 home runs in the past two seasons for L.A., and may be their best trade of the decade, since Lee hasn't become anything. But, you can't mention Dodgers steals without mentioning two amazing minor league deals. The first one paid-off this year. Max Muncy was signed after being released by the A's. In 2018, Muncy hit 35 home runs with a .973 OPS. Justin Turner was a player that hit for average for the Mets, but they still decided to release him. In five seasons for the Dodgers, he's hit .305, with a .889 OPS, while averaging 15 home runs a season (19.5, if you don't count 2014, where he hit .340 with just seven home runs). Turner has become the Dodgers best all-around hitter.

Prediction
The Dodgers are a very good team. That's why they have been National League Champions two years in a row. The odds are very good they can win their seventh straight division title this year.
Posted by Carter at 7:38 PM