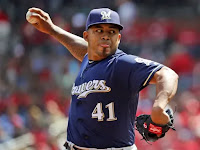 The Milwaukee Brewers have steadily increased their win total over the last five years. In 2014, they won 64. In 2015, 68. In 2016, they were victorious in 73 games. They took a big jump to 86 in 2017, and then to 96 in 2018. That is what finally got them into the playoffs, and they were a game away from the first National League pennant in club history. That was because of the additions of 2018 NL MVP Christian Yelich and Lorenzo Cain, and an elite bullpen. But, the NL Central is strong, and the Brewers will have to fight to get back to the playoffs.

Rotation
The rotation was the weakness for the Brewers last year, but was picked up by the bullpen. Jhoulys Chacin emerged as the ace of the staff, with a 3.50 ERA and 156 strikeouts in 192.2 innings. Chase Anderson's 3.93 ERA doesn't look bad, but allowed 30 home runs, tied for the NL lead. Zach Davies made just 13 starts, and had a wretched 4.77 ERA in them. Unless the Brewers sign a starter like Dallas Keuchel or Gio Gonzalez (who made five starts in September for the Crew), then the final two spots are a four way race. Junior Guerra made 26 starts last year, but is viewed as a potential swingman. Corbin Burnes and Brandon Woodruff are both starters, but combined for just four starts, all from Woodruff, in 49 appearances. Now 23 year old Freddy Peralta impressed in his first MLB season, with 96 strikeouts in 78.1 innings, including 13 in his first start. Jimmy Nelson had a career year in 2017, but missed all of 2018 due to surgery on his shoulder. He'll be back by midseason.

Catching
Besides the rotation, the Brewers' weakness was their catchers, with 38 year old Erik Kratz starting in the postseason. Kratz looks unlikely to start the season with the team. Manny Pina hit a decent nine home runs in 98 games. But, the team signed Yasmani Grandal to a one year deal. Grandal has hit twenty home runs in each of the last three seasons, and had an .815 OPS last year.

Infield
The Brewers found their first baseman last year in Jesus Aguilar. Aguilar broke out with 35 home runs, 108 RBIs and an .890 OPS. Second base goes to Travis Shaw. Shaw is a third baseman, but moved to second last year when the team traded for Mike Moustakas, who was brought back on a one year deal. They combined for 60 home runs last year. Shortstop Orlando Arcia disappointed, and had AAA stints. He still will get a second chance this year.

Outfield
The Brewers, in a span of 24 hours, went from having an average outfield to one of the league's best. The team acquired Christian Yelich from Miami for a package including top prospect Lewis Brinson. Yelich was an instant success. He hit .326 with a 1.000 OPS, earning NL MVP honors (more on his stats later). Lorenzo Cain was brought back on a five year deal, and he stole 30 bases and had a 6.9 WAR. Ryan Braun hasn't aged great, but he still hit 20 home runs last year.

Bench
Before the team brought back Moustakas, the second base job was between Hernan Perez and Cory Spangenberg. Both can play the infield and outfield. The additions of Yelich and Cain and Aguilar breakout 2018 pushed Eric Thames to the bench. He hit 16 home runs, playing a mix of the corner outfield and first base. Pina is the backup catcher.

Steal of the Decade
It is pretty obvious right now what the trade is. Well, here we go. Before 2018, the Marlins sent Christian Yelich to the Brewers for Lewis Brinson, Monte Harrison, Isan Diaz and Jordan Yamamoto. After one year, Yelich already has an MVP under his belt. He hit .326, with a 1.000 OPS, plus 36 home runs, 100 RBIs and 22 stolen bases.

Prediction
The Brewers didn't lose any core players this offseason. While the Cardinals did add Paul Goldschmidt, the Brewers remain with the best team in the Central. Thus, they are my favorites for the Central.
Posted by Carter at 9:57 PM