How they were built: Detroit Tigers 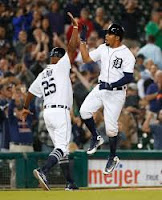 The Tigers were once a contender, but are now a bad team. They are in a rebuilding phase, but still have talent acquired on their team. This is how they were built.

Catchers
Grayson Greiner
Greiner was drafted in the 3rd round in 2014.
John Hicks
The Tigers picked Hicks off waivers from the Twins in August 2016.

Infielders
Miguel Cabrera
In December 2007, the Tigers acquired Cabrera and Dontrelle Willis from the Marlins for Andrew Miller, Cameron Maybin, Mike Rabelo, Frankie De La Cruz, Burke Badenhop and Dallas Trehern.
Josh Harrison
The Tigers signed Harrison to a one year deal in February.
Jordy Mercer
The Tigers signed Mercer to a one year deal in December.
Jeimer Candelario
Candelario was acquired with Isaac Paredes from the Cubs for Justin Wilson and Alex Avila in July 2017.
Niko Goodrum
The Tigers signed Godrum to a minor league deal in November 2017.
Gordon Beckham
Beckham signed as a minor league free agent in January.

Pitchers
Jordan Zimmermann
Zimmermann signed a five year deal with the Tigers in November 2015.
Matt Boyd
The Tigers acquired Boyd in July 2015 with Daniel Norris and Jairo Labourt from the Blue Jays for David Price.
Daniel Norris
The Tigers acquired Norris in July 2015 with Matt Boyd and Jairo Labourt from the Blue Jays for David Price.
Spencer Turnbull
Turnbull was a 2nd round pick of the Tigers in 2014.
Tyson Ross
Ross signed a one year deal with the Tigers in December.
Victor Alcantara
Alcantara was acquired from the Angels in November 2016 for Cameron Maybin.
Buck Farmer
Farmer was a 5th round pick in 2013.
Reed Garrett
Garrett was selected from the Rangers in the Rule 5 draft.
Daniel Stumpf
Stumpf was picked from the Royals in the Rule 5 draft in December 2016.
Blaine Hardy
Hardy was signed as a minor league free agent in April 2013.
Joe Jimenez
Jimenez signed in June 2013 as an amateur free agent.
Shane Greene
Greene was acquired in a three team trade in December 2014. The Tigers acquired Greene, and gave up Robbie Ray and Domingo Leyba.

IL
JaCoby Jones
Jones was acquired from Pittsburgh in July 2015 for Joakim Soria.
Drew VerHagen
VerHagen was a 4th round pick in the 2012 draft.
Matt Moore
Moore signed a one year deal in the offseason.
Michael Fulmer
Fulmer was acquired on July 31st, 2015 with Luis Cessa from the Mets for Yoenis Cespedes.