How they were built: Kansas City Royals 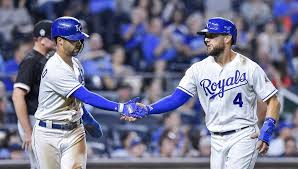 The Royals are just four seasons removed from a World Series victory, but are now a bad team. They still have holdovers from their 2015 team, but some new players have also joined. This is how they were built.

Catchers
Martin Maldonado
Maldonado signed a one year deal with the Royals in March.
Cam Gallagher
Gallagher was the Royals' second round pick in the 2011 draft.

Outfielders
Billy Hamilton
Hamilton signed a one year deal with the Royals just a week after Owings did.
Jorge Soler
The Royals acquired Soler in December 2016 from the Cubs for Wade Davis.
Alex Gordon
Gordon was a first round pick (2nd overall) in the 2005 draft.
Terrance Gore
The Royals signed Gore in December.

IL
Salvador Perez
Perez signed as an amateur free agent in 2006.
Danny Duffy
Duffy was a third round pick in 2007.
Brian Flynn
Flynn was acquired in November 2014 from the Marlins with Reid Redman for Aaron Crow.
Posted by Carter at 7:00 PM