How they were built: New York Yankees 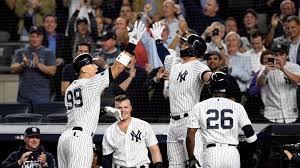 The Yankees have been plagued with injuries to start 2019, but have a boatload of talent on their roster, made by GM Brian Cashman. This is how they were built.

Catchers
Gary Sanchez
In July 2009, Sanchez signed as an amateur free agent.
Austin Romine
Romine was drafted in the second round in the 2007 draft.

Infielders
Luke Voit
The Yankees acquired Voit along with international signing pool money in July 2018 from the Cardinals for Chasen Shreve and Giovanny Gallegos.
Gleyber Torres
Torres was acquired in July 2016 from the Cubs with Adam Warren, Billy McKinney and Rashad Crawford for Aroldis Chapman.
Tyler Wade
Wade was fourth round pick in the 2013 draft.
DJ LeMahieu
LeMahieu signed a two year deal before 2019.
Greg Bird
Bird was a fifth round pick in the 2011 draft.
Thairo Estrada
In August 2012, Estrada signed as an amateur free agent.

Outfielders
Aaron Judge
Judge was drafted in the first round (32nd overall) in 2013.
Brett Gardner
Gardner was a third round pick in 2005.
Clint Frazier
Frazier was acquired from the Indians in July 2016 with Ben Heller, Justus Sheffield and JP Feyreisen for Andrew Miller.
Mike Tauchman
Tauchman was acquired from the Rockies days before Opening Day 2019 for Phillip Diehl.

Pitchers
Masahiro Tanaka
Tanaka signed as a free agent in January 2014.
James Paxton
Paxton was acquired in November 2018 from the Mariners for Justus Sheffield, Erik Swanson and Dom Thompson-Williams.
JA Happ
Happ was acquired in July 2018 from the Blue Jays for Brandon Drury and Billy McKinney.
Domingo German
German was acquired in December 2014 from the Marlins with Nathan Eovaldi and Garrett Jones for David Phelps, Martin Prado and cash.
Jonathan Loaisiga
Loaisiga was signed in February 2016 as a free agent.
Luis Cessa
Cessa was acquired in December 2015 from the Tigers along with Chad Green for Justin Wilson.
Stephen Tarpley
Tarpley was acquired with Tito Polo in August 2016 from the Pirates for Ivan Nova.
Tommy Kahnle
Kahnle was acquired in July 2017 from the White Sox with David Robertson and Todd Frazier for Ian Clarkin, Blake Rutherford, Tyler Clippard and Tito Polo.
Jonathan Holder
Holder was drafted in the sixth round in 2014.
Chad Green
Green was acquired in December 2015 from the Tigers with Luis Cessa for Justin Wilson
Adam Ottavino
Ottavino signed a three year deal with the Yankees in January 2019.
Zack Britton
In July 2018, the Yanks acquired Britton from the Orioles for Dillon Tate, Cody Caroll and Josh Rogers
Aroldis Chapman
Chapman signed a five year deal with the Yankees in December 2016.

IL
Luis Severino
In December 2011, Severino signed as an amateur free agent.
Giancarlo Stanton
In December 2017, the team acquired Stanton from the Marlins for Starlin Castro, Jose Devers and Jorge Guzman
CC Sabathia
In December 2008, Sabathia signed as a free agent.
Dellin Betances
Betances was drafted in the 8th round in 2006.
Didi Gregorius
The Yankees acquired Didi in a three team trade from Arizona. They sent Shane Greene to Detroit.
Miguel Andujar
Andujar was signed in 2011 as an amateur free agent.
Aaron Hicks
Hicks was acquired in November 2015 from the Twins for John Ryan Murphy
Troy Tulowitzi
Tulowitzki was signed as a free agent this offseason.
Posted by Carter at 6:38 PM