How they were built: Milwaukee Brewers 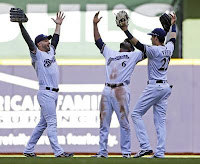 The Brewers have become one of baseball's best teams the past few years, with a stellar bullpen and outfield. This is how they were built.

Catchers
Yasmani Grandal
Grandal signed a one year deal with an option for 2020 in January.
Manny Pina
Pina was acquired from the Tigers in December 2015 with Javier Betancourt for Fransisco Rodriguez.

Infielders
Jesus Aguilar
Aguilar was claimed off waivers from the Indians in February 2017.
Travis Shaw
Shaw was acquired from the Red Sox in December 2016 with Josh Pennington, Mauricio Dubon and Yeison Coca for Tyler Thornburg.
Orlando Arcia
Arcia signed in October 2010 as an amateur free agent.
Mike Moustakas
Moustakas was acquired in July from the Royals for Brett Phillips and Jorge Lopez.
Hernan Perez
Perez was claimed off waivers from the Tigers in June 2015.
Eric Thames
Thames signed with the Brewers in November 2016.

Outfielders
Christian Yelich
Yelich was acquired in January 2018 from the Marlins for Lewis Brinson, Isan Diaz, Monte Harrison and Jordan Yamamoto.
Lorenzo Cain
Cain signed a five year deal with the Brewers in January 2018.
Ryan Braun
Braun was drafted 5th overall in 2005.
Ben Gamel
Gamel was acquired in December from the Mariners with Noah Zavolas for Domingo Santana.