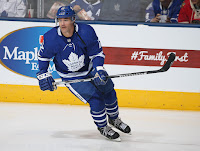 The Carolina Hurricanes have acquired LW Patrick Marleau, a 2020 1st round pick and a 2020 7th round pick from the Toronto Maple Leafs in exchange for a 2020 6th round pick.

The Leafs absolutely need to free up cap space. They now have a projected $14 million in cap space, and need to sign RFAs Mitch Marner, Kasperi Kapanen and Andreas Johnsson. There is still a good chance that they will trade another contract as well to get everybody signed. Marleau had a cap hit of $6.25 million, and since he is older than 35, buying him out doesn't save any cap space. A first round pick is a tough ask, but you don't want to lose Marner.

The Canes just pay $6.25 million for a first round pick. They have a lot of cap space, and they will reportedly buy out Marleau. Getting a first round pick is a very good deal. It is top 10 lottery protected. They just give up a sixth, but get a seventh rounder as well. Marleau will want to go back to San Jose, where he played his first 19 years.
Posted by Carter at 12:37 PM