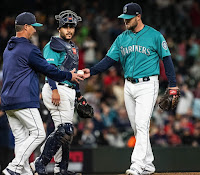 The Washington Nationals have acquired RHP Hunter Strickland from the Seattle Mariners in exchange for LHP Aaron Fletcher.

The Nats are improving their bullpen, and this is the third reliever trade of the day, acquiring Daniel Hudson and Roenis Elias, the latter also from the Mariners, so the trades may be combined. Strickland has been hurt almost all of this season, but just came back.

Strickland, 30, has allowed three runs in 3.1 innings this year (8.10 ERA) with three strikeouts and two saves. In his MLB career for the Mariners and San Francisco Giants, Strickland has a 2.98 ERA with 214 strikeouts in 229.1 innings, plus 21 saves.

The Mariners have barely even used Strickland this year, as he has been hurt. They get Fletcher in return. Fletcher was the Nats' 21st best prospect, per MLB Pipeline.