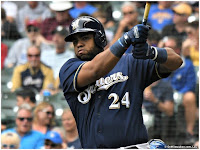 The Tampa Bay Rays have acquired 1B Jesus Aguilar from the Milwaukee Brewers in exchange for RHP Jake Faria.

Aguilar was an all-star last year, with 35 home runs. He only has eight this year, and has been terrible. He does have a .298 July batting average, so he could get hot at the right time. The Rays already left handed hitting first basemen in Nate Lowe and former Brewer Ji-Man Choi, but Aguilar is a power bat, hitting right handed. Faria has been a starter in the past, but has been strictly a reliever this year.

The Brewers end up trading Aguilar when his stock is low, which sucks. But they get Faria, a promising bullpen and rotation option who has been on the MLB/AAA shuttle many times this year. He turned 26 yesterday.