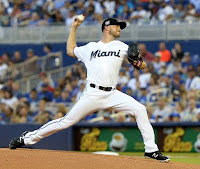 The Tampa Bay Rays have acquired RHP Trevor Richards and RHP Nick Anderson from the Miami Marlins in exchange for RHP Ryne Stanek and OF Jesus Sanchez.

I don't understand this deal for the Rays. Richards is a decent starter and Anderson is a good reliever, but I'd take Stanek over Anderson. Also, Sanchez is their fourth best prospect and 42nd overall in baseball. Trading Sanchez for two pitchers with ERAs around 4 doesn't make sense, especially when including Stanek.

Anderson, 29, made his MLB debut this year, with a 3.92 ERA and 69 strikeouts in 43.2 innings. He also recorded one save. He would likely have been the closer if not traded, as Sergio Romo was dealt to Minnesota.

The Marlins restock their farm system by getting Sanchez. They also acquire Stanek, a good arm, with a hard fastball and a good slider. He has a lot of starts, but that is because the Rays used him as an opener consistently.