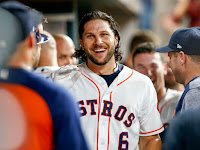 The New York Mets have acquired OF Jake Marisnick from the Houston Astros in exchange for LHP Blake Taylor and OF Kenedy Corona.

The Mets are currently seeing longtime OF Juan Lagares depart in free agency after the team declined his option. Since Yoenis Cespedes will not likely return for at least the first half of 2020 (maybe even the whole season) the Mets need a right handed bat in the outfield to counter the left handed Michael Conforto, Brandon Nimmo and Jeff McNeil. But more importantly, they could use both fielding and speed more than a bat in a Lagares replacement, mainly because that is what Lagares brought to the team. Marisnick is not a good hitter, but he has hit double digit home runs in each of the last three seasons, with 10 in 2019 and 2018. His one good offensive season was 2017, that saw him hit career highs in home runs (16), RBIs (35), batting average (.243), Slugging percentage (.496) and OPS (.815), among many other categories. But Marisnick has gotten much worse offensively since. His 2019 numbers included a much worse .700 OPS, a .233 average and a .289 OBP. Marisnick stole 10 bases, his first time hitting double digits since 2016. In 2015, Marisnick stole 24 bases. The lack of stolen bases lately does not mean Marisnick has lost some speed. His sprint speed was in the 95th percentile among major leaguers, according to baseball savant. Marisnick played in 120 games this past season, but only had 318 Plate Appearances. The Astros would use him as a defensive replacement late in games. Over the last two seasons, Marisnick has saved 17 defensive runs, but just five of them came in 2019. The Mets could use Marisnick as a fourth outfielder, or a starter if Jeff McNeil plays in the infield.

The Astros traded Marisnick to cut salary, but more importantly to open up a chance for a young outfielder to stay on the soon to be 26 man roster. Myles Straw, who played in 56 games in 2019, and top prospect Kyle Tucker, who played in 22 games, are both options. Straw's right handed bat could be more appealing since that is what Marisnick was, and because every outfielder excluding George Springer is a lefty hitter. Taking Marisnick's 40 man roster spot is Taylor, who the Mets had recently added to their 40 man. Taylor was a second round pick by the Pirates in 2013, but was traded to the Mets less than a year later with Zack Thornton for Ike Davis. While he has not played in the MLB yet, Taylor had a 2.16 ERA with 74 strikeouts in 66.2 innings for AAA Syracuse (only 0.1 inning for Syracuse), AA Binghamton and High-A St. Lucie. He struck out 11 batters in nine Arizona Fall League innings, allowing two runs. Taylor could make his MLB debut in 2020. Corona is a wild card. A 19 year old, Corona hit .301 with five home runs, 29 RBIs and 19 stolen bases in 63 games, reaching as high as Low-A Brooklyn (4 games).
Posted by Carter at 8:42 PM