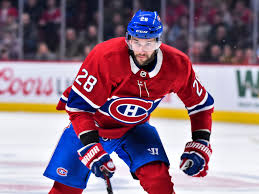 The St. Louis Blues have acquired defenseman Marco Scandella from the Montreal Canadiens in exchange for a 2020 second round pick and a conditional 2021 4th round pick. The Canadiens get the 4th rounder if Scandella re-signs in St. Louis, or if the Blues win two playoff rounds and Scandella plays in at least half of the games. The Canadiens also retain 50% of Scandella's $4 million cap hit.

This is a really good return for the Canadiens. They acquired Scandella for a 4th rounder earlier this year, and exchanged him for a second and potentially another 4th round pick. That is an odd thing considering his scoring and +/- numbers went down post trade. The Blues might have been desperate. A third round pick was a more appropriate price for Scandella. He is a defensive defenseman that will play bottom pair minutes. The Blues could use a left handed defenseman as now Jay Bouwmeester is out indefinitely. Vince Dunn and Carl Gunnarsson are the only other lefty defensemen on the roster.

The Canadiens are not in a good spot this year, currently sixth in the Atlantic Division with 62 points. It is very unlikely that they make the playoffs. They are looking to trade their rentals. They will profit big on in-season additions Scandella and Ilya Kovalchuk. Moving up two rounds for Scandella is an absolute steal for GM Marc Bergevin.