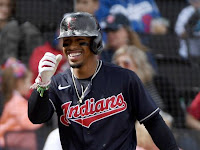 Entering 2019, the Indians were the favorites for the AL Central title. They saw the Twins surprise them, and run away with the division. The Indians were forced to settle with a wild card berth, except they missed the playoffs entirely. The Indians finished three games back of the Rays, and four back of the A's for both spots. The Indians traded away Trevor Bauer at the deadline, and two time Cy Young winner Corey Kluber in the offseason. Superstar Francisco Lindor is a free agent in two seasons, and the Indians seem more likely to trade him than pay him. Things in Cleveland can blow up very fast.

Bullpen
On June 20, closer Brad Hand had an ERA of 0.86. He struggled the rest of the year, ending with a 3.30 ERA. That was his highest ERA since he was a Marlins swingman in 2015. He struck out 84 batters with a career high 34 saves in 57.1 innings. Nick Wittgren's first year with the Indians was very good, with a 2.81 ERA and 60 strikeouts in 57.2 innings with four saves. James Karinchak had a 2.67 ERA with 74 strikeouts in 30.1 MiLB innings, for a whopping 22 K/9. However, he still had a 5 BB/9. He was a September call-up, striking out eight in 5.1 innings, allowing one run. Submariner Adam Cimber's first full season in Cleveland did not go well. He had a 4.45 ERA with a 6.5 K/9 and 8.9 H/9. He pitched in just 58.2 innings despite playing 68 games. He will be one of the few right handers affected by the three batter limit rule. Another player affected by the rule will be lefty Oliver Perez. He had a 1.39 ERA in 2018, but regressed with a 3.98 ERA in 2019. He struck out 48 batters in 40.2 innings over 67 games. Emmanuel Clase came over in the Corey Kluber trade. He will miss the first month of the year with a back strain. He possesses a 102 miles per hour fastball. Hunter Wood came over from the Rays midseason. He had a 2.98 ERA with 39 strikeouts in 45.1 innings combined. The final two spots are up in the air. Plutko can get one as a swingman when Clevinger returns. That would leave Logan Allen, Phil Maton and James Hoyt up for the final spot. They combined to play in just 18 games for the Indians last year. A former top prospect for the Padres, Allen is a lefty starter that would move to the pen. Acquired midseason for Trevor Bauer, Allen played in one game in Cleveland, striking out three in 2.1 innings, not allowing a run. Maton and Hoyt are standard relievers. Maton had a 2.92 ERA with 13 strikeouts in 12.1 innings, while Hoyt had a 2.16 ERA with 10 strikeouts in 8.1 innings.

Catchers
Roberto Perez had a big breakout year in his first season as a full-time starter. He hit 24 home runs, crushing his previous career high by 16. He also had a .774 OPS, and won his first career Gold Glove. Sandy Leon hit .310 with an .845 OPS for the Red Sox in 2016, but has regressed offensively since. He hit five home runs with a .192 average and .548 OPS in his last of five seasons in Boston. The Indians acquired Leon in a trade, but not for former backup Kevin Plawecki, who signed in Boston.

Infielders
The Indians will have something that is very, very rare. They will have an all switch hitting infield, not including a backup. In his return to Cleveland Carlos Santana tied his career high in home runs with 34, while walking 108 times with a .281 average and .911 OPS. He won a Silver Slugger and was 16th in MVP voting. The Indians signed Cesar Hernandez after the Phillies non-tendered him. He has hit for power, average and has stolen bases, but not all at the same time. He stole 15+ stolen bases a season from 2015-2018, but stole just nine in 2019. He hit .294 in both 2016 and 2017, but that lowered to .279 in 2019. He hit 14 home runs, one off of his career high 15 set in 2018. Superstar Francisco Lindor won his second Gold Glove. He finished 15th in MVP voting, which was actually his worst ranking since he didn't receive a vote in his rookie season. "Mr Smile" hit 32 home runs with 22 stolen bases with a .284 average and an .854 OPS. He has two Gold Gloves and two Silver Sluggers, but he has never won both of them in the same year. Jose Ramirez finished third in MVP voting in 2017 and 2018. He started off slow, with a .198 average and a .586 OPS on June 12. He went on a tear in the second half, finishing with 23 home runs and 24 stolen bases. His .806 OPS might seem low, but it is a huge improvement. While outfield auditions will go on, the Indians will likely carry just one backup infielder. That will likely be former top prospect Christian Arroyo, acquired from Tampa Bay in the same midseason trade as Hunter Wood. Arroyo has played in just 70 career games, with six home runs, a .215 average and a .622 OPS. He did not play for the Indians after the trade.

Outfielders
The Indians are without three clear candidates for an outfield spot. The only lock to start is Oscar Mercado. The now 25-year-old center fielder played in 115 games, hitting 15 home runs and stealing 15 bases with a .269 average and .761 OPS. He finished 8th in Rookie of the Year voting. Domingo Santana hit 30 home runs in 2017 before regressing in 2018. He was traded to Seattle for last year. He hit 21 home runs with a .770 OPS and 108 OPS+. Tyler Naquin will make it close to Opening Day after tearing his ACL late last year. He hit 10 homers with a .288 average and a .792 OPS in 89 games. Jordan Luplow had a good first season in Cleveland. He hit 15 home runs with a .923 OPS in 85 games. If Naquin is healthy then either Jake Bauers or Delino DeShields Jr. will lose their roster spot. Coming over for Kluber, DeShields is a great fielder with 106 stolen bases in 539 career games. However, he also has a career OPS of .668. Bauers hit 12 home runs last year, but struck out 115 times and had a .683 OPS. Greg Allen and Bradley Zimmer have outside chances at a spot. Allen is a speedy outfielder who stole 21 bases in 91 games in 2018. However, he is also a bad hitter, like DeShields. A former first rounder, Zimmer has a .652 OPS in 144 career games. Franmil Reyes will likely be regulated to DHing duties. He hit 37 home runs for the Indians and Padres last year, with an .822 OPS.

Prediction
The Indians are regressing. They can still develop pitchers, and while Terry Francona is a great manager, the ownership is still cutting salary. They traded away Kluber for no impact pieces, and the Bauer trade hurts too, even if it got them Reyes. I predict that the Indians will finish 3rd in the AL Central, missing the playoffs.
Posted by Carter at 10:30 PM