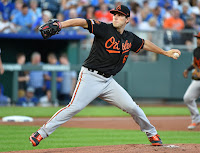 There were two things about 2019 that were good for the Orioles. The first was that they drafted Adley Rutschman first overall in June, and the second is that they didn't finish last in the MLB. The Tigers beat the Orioles to the first overall pick this June, while Baltimore settled for second, selecting University of Arkansas outfielder Heston Kjerstad, who hit 37 home runs with an OPS of 1.011 over a three year career (150 games played). Despite moving up in the standings one place from 2018 to 2019, the Orioles' rebuild is not even close to being over. They have some good players in Trey Mancini and John Means, but it isn't guaranteed that they will still be decent players by the time the Orioles ever turn it around, when Rutschman and Kjerstad make the starting lineup. It is all about helping the minor league teams now.

Rotation
The Orioles had just one player finish the season with the team with at least 10 innings pitched and an ERA under 4.00. That was John Means, a 26 year old rookie with an elite change-up, but not the strikeout stuff. Means struck out just 121 batters in 155 innings with a 3.60 ERA. Using his change-up 28.8% of the time helped Means have a hard hit percentage of just 30.5%, putting him in the top ten percent of the league in that category. The rest of the rotation is a big question. Former Rays second starter Alex Cobb started the season on the IL with a groin strain, then suffered a lumbar strain and later a hip impingement, which required surgery, ending his season after three starts. Cobb struck out eight batters and allowed 15 earned runs in 12.1 innings. He also somehow allowed nine home runs. In his last full season of 2018, Cobb was not good. According to baseball savant, Cobb was in the bottom ten percent among pitchers in hard hit percentage, expected batting average, whiff rate, and strikeout rate. His opponent's exit velocity, expected ERA, expected wOBA against, expected slugging against, barrel % and fastball velocity and spin were also in the bottom half of the league. If you don't understand what that means, just know that Cobb was really bad in 2018. The Orioles signed 2013 4th overall pick Kohl Stewart to a major league deal. In 17 career games (six starts), Stewart has a 4.79 ERA with 34 strikeouts in 62 innings. Even as a AAA starter last year Stewart had a 5.14 ERA. His best pitch is his slider. In his nine MLB games last year, Stewart went to it 32.1% of the time, and finished seven of his ten strikeouts with the pitch. Another former first rounder, Asher Wojciechowski, is more of a wild card. In 82.1 innings last year, Wojciechowski struck out 80 batters and allowed just 80 hits. However, 17 of those hits were home runs, helping inflate his ERA to 4.92. The Orioles gave Wade LeBlanc a minor league deal. A journeyman with a 3.72 ERA in 162 innings for Seattle in 2018, LeBlanc struggled last year, with a 5.71 ERA in 121.1 innings, and lost his spot in the rotation. Now on a much worse Orioles team, LeBlanc gets another shot. LeBlanc's Mariners teammate Tommy Milone is also in camp. Milone pitched 100 innings last year, the first time he's done that since 2015. The Orioles gave two Rule-5 picks in Brandon Bailey and Michael Rucker a look in Spring Training 1.0, but sent them back to the Astros and Cubs, respectively.

Bullpen
Closer Mychal Givens failed to pitch 70 innings for the first time since his first taste of the MLB in 2015. His 4.57 ERA was over a half run worse than his previous career worst. He saved only 11 games, but his 86 strikeouts in 63 innings led to a career high 12.3 K/9. Richard Bleier never had a season with an ERA over 2.00 entering 2019, but after the season, his career ERA went all the way up to 3.05. A lefty with a career 4.3 K/9, Bleier allowed six home runs in 55.1 innings, six more home runs than he allowed in 2018. Even though he won all three of his decisions, Bleier had an awful 5.37 ERA. On the bright side, hitters facing Bleier had a barrel percentage of just 3.1 percent, putting Bleier in the top 3% of the league. Hunter Harvey, a 24 year old first rounder in 2013, finally debuted late in 2019, allowing one run while striking out 11 in 6.1 innings (1.42 ERA). Harvey looks like the potential future closer. Speaking of potential future closers, Toronto thought Miguel Castro was exactly that, when he had four saves in his first 13 career games in 2015. However, he saved his first game since then last season. His K/9 went from 5.9 in 2018 to 8.7 in 2019. However, his ERA raised from 3.96 to 4.66. The six-foot-seven righty throws a sinker with an average of 97 miles per hour. Lefty Paul Fry allowed lefties to have an .839 OPS, but righties had just a .679 OPS. He excels in forcing ground balls, with a 58.4 ground ball percentage. The Orioles claimed Travis Lakins from the Red Sox. He didn't have good AAA numbers, but he had a respectable 3.86 ERA in 23.1 innings last year. Shawn Armstrong had a 5.74 ERA in 58 innings, striking out 63. Tanner Scott, Dillon Tate, David Hess, Evan Phillips and Cole Sulser will fight for three spots to make the 30-man team.

Catchers
The Orioles picked up Pedro Severino from the Nats in Spring Training, and he was not bad offensively. He hit 13 home runs with a .740 OPS, okay for a catcher. He also had a 1.2 bWAR. Chance Sisco, once a decent catching prospect, hit eight home runs, but also had a weak .210 average and .729 OPS. Sisco has a career .203 batting average. Veteran catcher Bryan Holaday is a non-roster invitee. He hit a career high four home runs in 43 games for Miami last year. He had a solid .278 batting average and a .779 OPS. If it weren't for the pandemic, there would be a great chance of Rutschman debuting in '21, but I think that his debut will be delayed to either really late 2021 or 2022, if there isn't a future COVID related stoppage. There is a very good chance that he will be on Baltimore's 60-man "taxi squad".

Infielders
Former 53 home run hitter Chris Davis was usurped by Jeff Mathis as the worst hitter in baseball. Davis was still terrible in 2019, with a .179 average and .601 OPS. While when he connects with the ball it is normally good (10.5% barrel percentage, just outside the top quarter of the league), that has not happened often, as his K rate rose to a career high 39.5%, and he missed almost half of the breaking balls he swung at, and over half of off-speed pitches. Trey Mancini was the best hitter for the squad last year, after he had a breakout season, hitting 35 home runs with 97 RBIs, a .291 average and .899 OPS. Unfortunately, he was diagnosed with Stage 3 cancer in Spring Training, and will most likely miss the entire season. The Orioles took a chance on second baseman Hanser Alberto, and he hit 12 home runs with a .305 average. He hit .398 against lefties, ranking among the league's best. The numbers show that Alberto's 2019 was likely a fluke. His 82.8 average exit velocity and 18.3% hard hit percentage were both in the first percentile among hitters. However, if he continues with his 99th percentile 9.1 K%, then he will have no trouble finding a job somewhere. The Orioles traded away Jonathan Villar, who was at one point the team's best player. His replacement is Jose Iglesias, a good defender who hit 11 home runs with a .288 average for the Reds last year. Like Alberto, Iglesias doesn't hit the ball hard but won't strikeout. His 12 outs above average at shortstop last year put him in the 97th percentile. Rio Ruiz hit 12 home runs, but his other offensive numbers weren't good. Richie Martin, a Rule 5 pick last year, spent the whole year with the team, and hit .208 with a .581 OPS. He can play shortstop, second and third base. His sprint speed of 29.5 ft/s puts him among the league leaders. Andrew Velazquez isn't a good hitter, and only stole three bases in AAA last year. However, he has some MLB experience and stole 29 in AAA in 2018. Renato Nunez can play corner infield, but he is more of a DH. He hit 31 home runs in his first year with the team.

Outfielders
Switch hitting outfielder Anthony Santander hit 20 home runs in 93 games after hitting one home run in his previous 46 career games. He also had a .773 OPS. Austin Hays was called up in September and hit four home runs with a .309 average and .947 OPS. He crushed fastballs, with a slugging percentage of .750 against them. 2015 first rounder DJ Stewart had a weak .698 OPS, but will get a good chance to be the left fielder. His K rate of 18.3% was good for 2019 baseball. Dwight Smith Jr. had a .241 batting average with 13 home runs. Fighting with Stewart for the left field nod, Smith was a negative fielder, with -10 outs above average. Stevie Wilkerson can play all over the field. Mostly at center field, Wilkerson hit 10 home runs but had a .225 average and .286 OBP. The best part of his game is his sprint speed of 28.3 ft/s.

Prediction:
The Orioles are not a good team. That is shown by their last two seasons. It is also evident by the fact that the simulation has them in last place, while their team is carried by players that will not play for them in 2020 (see bottom). The Orioles are destined for another last place finish, and things won't turn around until their pitching staff improves, and when Hjerstad and Rutschman make the team.

*All offensive categories were actually lead by Trey Mancini, but I did not put him as the leader because of his unavailability for the 2020 season.
**Similarly, most pitching categories were lead by players that will not play for the Orioles in 2020. Fake free agent signee Aaron Sanchez lead in starter ERA and strikeouts (with current free agent Keyvius Sampson in second place), while Eduardo Paredes, Addison Reed and Quintin Torres-Costa, all not on the team, in the top three spots for reliever ERA.
Posted by Carter at 4:29 PM