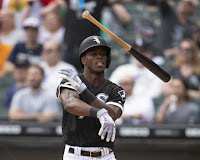 Every year, there is a team that sticks out to everyone in Spring Training. That might be the White Sox this year. They already have a talented farm system, with former first rounders and big-money international players coming up to join the team this year. To help out their young talent, they have supplemented them by signing veterans stars, who will mentor them as well as win the team some games. Their big issue will be their shallow bullpen, but if Chicago can figure that out, they are legitimate AL Central contenders.

Rotation
The White Sox might have found their ace in Lucas Giolito. A former 1st rounder who was once baseball's top pitching prospect, Giolito struggled in his first full season, with the worst ERA in baseball. He rebounded in 2019, with a 3.41 ERA and 228 strikeouts in 176.2 innings. He also had three complete games with two of them being shutouts, both the most in the league. Giolito's 131 hits allowed were the least in the American League among qualifiers, and second least in MLB to Sonny Gray of the Reds. He made the all-star team and finished 6th in AL Cy Young voting. The White Sox signed former Cy Young winner Dallas Keuchel to a four year deal. In his one year in Atlanta, Keuchel had a 3.75 ERA and a 121 ERA+ in 112.2 innings. Keuchel does not throw hard (no pitches averaging 90 miles per hour or more) and puts less spin on his slider than a lot of guys have on their fastball, which means he relies on soft contact to get outs. When his average exit velocity against was a career high 88 miles per hour in 2019, signs point to a regression for Keuchel. A great fielder, Keuchel is a four time Gold Glove winner. Twelve year veteran Gio Gonzalez is in his third stint with the White Sox, but had not played with the team yet. He made just 17 starts last year with two relief appearances for the Brewers, posting a 3.50 ERA. Like Keuchel, he does not throw hard, and needs soft contact to succeed. Gonzalez was more successful in inducing soft contact last year, with an 86.3 exit velocity. Carlos Rodon, the 3rd overall pick in 2014, is always hurt. Currently rehabbing from Tommy John surgery, Rodon should make Opening Day. He has only qualified for the ERA title once, in 2016. He had a 5.19 ERA in seven starts with 46 strikeouts. Reynaldo Lopez had an encouraging 3.91 ERA in 2018, but struggled in 2019, finishing the season with an ERA of 5.38 over 33 starts. He allowed a league leading 110 earned runs. His slider failed him, as the pitch that was dominant in 2018 was thrown 24 more times in 2019 than in 2018, and allowed 10 home runs, while it allowed none in 2018. Batters' slugging against the pitch went up from .268 to .500. Dylan Cease, acquired with Eloy Jimenez for Jose Quintana in 2017, had a rough debut. He had a 5.79 ERA in 14 starts, but he did finish with a 10 K/9. His fastball averages 96.5 miles per hour with a good spin rate of 2449 (better than Keuchel's slider), but he still got crushed with it. Opponents hit .356 with a .637 slugging against Cease's fastball, a pitch he threw 646 times. He could get pushed to the bullpen. Top pitching prospect Michael Kopech is back from Tommy John surgery. He made his debut at the end of 2018, making four starts. Expanded rosters should help Kopech make the Opening Day team.

Bullpen
The White Sox acquired Alex Colome last offseason and held onto him at the trade deadline in hopes of being competitive this year. Colome posted a 2.80 ERA with 30 saves and 55 strikeouts in 61 innings. Batters hit Colome hard, with an exit velocity of 90.7 mph on average. However, they haven't gotten great results out of that, as opponents had a .261 wOBA against him last year. The White Sox locked up set-up man Aaron Bummer, signing the southpaw to a five year deal. Bummer had a breakout 2019 season, limited both righties and lefties to an average under .200, and posting a 2.13 ERA with 60 strikeouts in 67.2 innings. Bummer has an elite sinker that he threw 67.7% of the time. Conveniently, two-thirds of batted balls versus Bummer were ground-balls. The team poached Steve Cishek from the cross-town Cubs. Cishek saved seven games last year, striking out 57 with a 2.95 ERA in 64 innings. Batters don't hit the ball hard against Cishek (84.5 exit velocity against), and even when they do, it isn't often, as he allows hard contact only 25.9% of the time. Evan Marshall was a good set-up man, with a 2.49 ERA and 41 strikeouts in 50.2 innings. Lefty Jace Fry struck out 68 batters in 55 innings, and while his 7.2 H/9 was good, his 7.0 BB/9 was among the worst in the league. It lead to an inflated 1.582 WHIP. His cutter is very good, with a .296 slugging against, but his curveball got crushed, with a 1.059 slugging. Former Royals closer Kelvin Herrera hasn't been the same since leaving Kansas City midway through 2018. He had a career worst 6.14 ERA for the White Sox last year. Herrera still throws hard with a fastball over 96 miles per hour, and his exit velocity against of 85.8 mph was actually a career best. He is still only 30 years old. The White Sox claimed Jimmy Cordero from the Mariners in June. He was solid the rest of the way, pitching in 30 games with a 2.75 ERA and 31 Ks in 36 innings, aided by a 97.4 mph sinker. Ian Hamilton had a AAA ERA of 1.71 in 2018, but allowed 18 runs in 16.1 AAA inning last year before missing the rest of the season with an injury. He is Chicago's 18th best prospect, according to MLB Pipeline. Carson Fulmer was picked 8th overall in 2015, but has a 6.56 ERA in 44 career games (15 starts).

Catchers
The White Sox went out and signed Yasmani Grandal to a four year deal. One of the best catchers in the game, Grandal is a good defender, and hit 28 home runs with a career high .848 OPS in his only season with the Brewers. That OPS was boosted by a career high 17.2% walk rate. James McCann was a surprise all-star, with career highs in home runs (18), batting average (.273) and OPS (.789). However, betting on a regression would be wise, especially after a transition from starter to backup. He does not walk much and strikes out too much. Plus, he is not a good pitch framer.

Infielders
Jose Abreu was a free agent, but took the qualifying offer before signing an extension. There was no chance he was leaving. He hit 33 home runs with a league leading 123 RBIs, plus a .284 average and .834 OPS. However, his batting average and OPS were actually lower than his career averages. His average exit velocity was 92.1 mph, a career best. Second base will be Nick Madrigal's spot. In a 162 game season, Madrigal wouldn't debut until May due to service time reasons, but in a 60 game year, he will be starting all year. He has Gold Glove potential and stole 35 bases with a .311 batting average in High-A, AA and AAA last year. 26 year old utility infielder Danny Mendick would have been the starter at second, but will transition back to a bench role. He hit two home runs with a .308 average and a .787 OPS in 16 games last year, his first time in the majors. He is Chicago's 19th best prospect. Tim Anderson was a 20-20 player in 2018, and while he didn't reach 20 home runs or 20 stolen bases in 2019, his improvements were more important, raising his batting average by 95 points, up to .335 to win the batting title. His .865 OPS was also a career high by over 100 points. He stole 17 bases and hit 18 home runs. With a 2.9 BB%, his game isn't perfect. Yoan Moncada, once MLB's top prospect, also saw major improvements. His 217 strikeouts in 2018 led the league, but he rebounded with a career high 25 home runs, with 10 stolen bases, a .315 batting average and a .915 OPS. He had a .602 and .606 slugging against fastballs and off-speed pitches, respectively. Andrew Romine is worth having around because he can play every position. His hitting needs improvement. He did not hit a home run in 72 games for Seattle last year, and his .210 batting average and .504 OPS were the worst of his career in a full season. Edwin Encarnacion can spell Abreu a day at first, but will be a primary DH. Encarnacion has hit at least 32 home runs in eight consecutive seasons. He has a career .851 OPS with 414 homers. His K rate and BB rate both improved from 2018.

Outfielders
Eloy Jimenez made the Opening Day roster last year as the club's top prospect. He hit 31 home runs with an .828 OPS. Jimenez hit the ball hard a good 47.9 percent of the time. He finished 4th in Rookie of the Year voting. Luis Robert is in a very similar situation. The club's top prospect this year, Robert had one interesting twist from Jimenez's situation. He already signed an extension, before his first MLB game. In three different minor league levels Robert hit 32 home runs, stole 36 bases, had a .328 batting average with an OPS of 1.001. Robert and Jimenez will be in center and left field for a long time. The White Sox acquired Nomar Mazara from the Rangers. A 24 year old with four years of MLB experience, Mazara hit exactly 20 home runs in his first three seasons, but hit only 19 in 2019. However, his .268 average and .786 OPS last year were career highs. Mazara hit .387 versus off-speed pitches in 2019. Leury Garcia can play the infield as well as the outfield. He led the league with 11 sacrifice hits last year. A seven year veteran, Garcia played in over 100 games for the first time in 2019. He stole 15 bases and his .279 batting average was a career best. Adam Engel is very fast, with a 30.0 ft/s sprint speed, and has a great glove in centerfield. However, he stole just three bases last year. Engel's .242 average was a career high.

Prediction
The White Sox are a promising team. They saw Eloy Jimenez debut last year, and will have Luis Robert and Nick Madrigal start out in 2020. The starting lineup is great, the pitching staff has their ace, and the bullpen has some good relievers. However, I do not think that they can be a playoff team until their rotation has better depth, which will come if Cease and Kopech can grab spots next year and perform, and their bullpen, well, also gets better depth. After Colome, Bummer, Marshall and Cishek, there is a big drop-off, which will depend on if Herrera can return to his old form. Until then, the White Sox aren't a playoff team, and will finish in 3rd place in the AL Central.
Posted by Carter at 2:37 PM