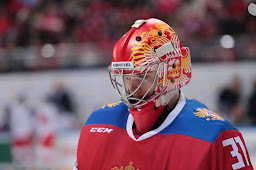 If you are a fan of 28 of the 31 NHL teams, tomorrow, July 13th, is just another normal day in the hockey world, as teams train and get ready to play in the playoffs in either Edmonton or Toronto. However, if you are a fan of the Minnesota Wild, Montreal Canadiens or New York Islanders, Monday is not normal at all. These three teams stand out, because they all have top prospects in the KHL with expiring deals that have a short window to come over. Starting on Monday at noon and ending Wednesday at 5:00 pm ET, the Habs, Wild and Isles will all scramble to get a deal done that they have been wanting to happen for years.
The main problem for Alexander Romanov, Kirill Kaprizov and Ilya Sorokin was that they were not allowed to play in the playoffs starting this August. That would normally mean that they would sign an entry level contract, not burn a year and then play under that deal next year, earning under $1 million. Romanov, Kaprizov and Sorokin would much rather play, burn the year off the deal, and become an RFA in the offseason, and sign a deal for more than $1 million, and potentially in the $3-4 million range. While the teams that own their rights (Montreal has Romanov, Minnesota has Kaprizov and New York owns the rights to Sorokin) would be fine with that, the NHL's roadblock was hurting them, and would lead to the players staying in the KHL. Luckily for everyone, except for rival fans, that all changed when the new CBA deal was agreed on July 6th. That made it possible for these players to sign, burn the year on their entry level deal, and not play, and still become an RFA next year. We found out today that these players could also practice with the team, but still cannot play.
Romanov, Kaprizov and Sorokin all were not high draft picks, but have become top prospects because of their play in the KHL. All playing different positions, Romanov is the defenseman. A more defensive defenseman and ranked by many as the third best prospect of the group (despite being drafted the highest), Romanov had seven points (all assists) in 43 games with a +21 rating for CSKA Moscow. The 38th overall pick in 2018, the 20 year old will be welcomed to Montreal, and the team announced late Sunday night that he would join the club.
Kaprizov, who turned 23 in April, became a point-per-game player in the KHL for the first time in his career in 2019-20. Drafted 135th overall (5th round) in 2015, Kaprizov was ranked as the 6th best drafted prospect in the NHL by The Athletic's Scott Wheeler (who has another ranking that will be mentioned when we get to Sorokin). In 57 games as Romanov's teammate on CSKA Moscow (there is a slight chance we might have another CSKA Moscow player mentioned later), Kaprizov scored 33 goals with 29 assists for 62 points in 57 games. In his three seasons since joining CSKA Moscow, Kaprizov has scored 78 goals with 75 points for 153 points in 160 games, plus a +88 rating.
Sorokin, also known as "The White Whale" to Islander fans, has been known as the best goalie outside of the NHL to many people for the last couple of years. Like his friend and hopefully his future rival Igor Shesterkin, Sorokin was a star goalie in the KHL before wanting to come to the NHL. Shesterkin had a great NHL debut for the Rangers in '19-'20, playing in 12 games. Sorokin, ranked as The Athletic's best goalie prospect, had a 1.50 GAA with a .935 SV% in 40 games for once again, CSKA Moscow. In four playoff games, Sorokin allowed just three goals on 89 shots, for a .73 GAA (he also had four assists in two games, despite not having an assist in the regular season). In parts of six seasons for CSKA Moscow, Sorokin's worst GAA is 1.61 and his worst SV% is .929, numbers that would earn him a Vezina Trophy if he repeated them in the NHL. Sorokin had 43 regular season shutouts for the team as well. Still just 24 (until early August), the 78th overall pick (3rd round) in 2014 can wreak havoc in the National Hockey League.
Posted by Carter at 9:26 PM