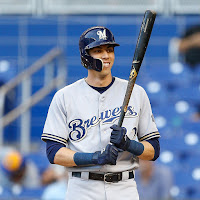 A year ago, everyone was talking about how bad the Christian Yelich trade was for the Marlins after Yelich won MVP. Even if Yelich never came close to an MVP win again, the trade would still be a steal for the Brewers. But, that is not the case. Yelich's 2019 was at least just as good as his 2018 season. An injury at the end of the year limited Yelich to just 130 games, and likely the back-to-back MVPs, as Cody Bellinger of the Dodgers scooped the award up, with Yelich left as the runner-up. The Brewers as a team, had a rough offseason, with numerous valuable players walking out the door. It will be hard for them to recover in 2020.

Rotation
The major question with the Brewers is their rotation. It was a big problem last year, and they lost Zach Davies, Gio Gonzalez, Chase Anderson and Jimmy Nelson in the offseason. They also released Jhoulys Chacin, their Opening Day starter, midseason. Brandon Woodruff figures to be the ace. Woodruff made 22 starts, a career high, with an 11-3 record, a 3.62 ERA and 143 strikeouts in 121.2 innings. Woodruff's fastball averaged 96.3 mph, and allowed an average exit velocity of 85.6 miles per hour. Eric Lauer, a first rounder in 2016 from the Padres, was acquired in a deal that saw Davies leave in the offseason. In 149.2 innings, Lauer struck out 138 with a 4.45 ERA. Eighty-seven of those strikeouts were with his fastball. Adrian Houser, unfortunately known for throwing-up, will transition to a sole starting position. In 35 games (18 starts), Houser had a 3.72 ERA with 117 strikeouts in 111.1 innings. Houser had an xERA of 3.43, in the 84th percentile among pitchers. The Brewers signed Josh Lindblom to be in the rotation. Lindblom has a 4.10 ERA with 131 strikeouts in 147 innings over his MLB career. Lindblom has spent four of the last five seasons in the KBO. Last year, he had a 2.50 ERA with 189 strikeouts in 194.2 innings, and a 20-3 record. Brett Anderson, an 11-year veteran, signed with the Brewers, who will be Anderson's sixth team. Anderson had a 3.89 ERA in 31 starts for the A's last year, but only 90 strikeouts in 176 innings, for a 12.1% K rate, a percentage in which some batters have a better walk rate than. Lanky left-hander Brent Suter is in competition for a rotation spot after returning late last year from Tommy John surgery. Suter, who throws one of the slowest fastballs in baseball, allowed one run in 18.1 innings (0.49 ERA) last season. He has a career exit velocity against of 83.6 mph. However, Suter might be best in a bullpen role.

Bullpen
If the Brewers can limit Josh Hader's workload, he can consistently be the top reliever in baseball. Hader pitched in 75.2 innings last year, with 37 saves and 138 strikeouts. His ability to pitch multiple innings and strike out an unbelievable amount of guys makes him so valuable. Hader had an xBA of just .155. With the loss of Junior Guerra, Matt Albers and Jeremy Jeffress in the bullpen, the Brewers will need Corey Knebel to return to his old form quickly. Knebel was a top reliever in baseball in 2017, with a 1.78 ERA, 39 saves and 126 strikeouts in 76 innings. He regressed in 2018 to a 3.58 ERA before missing 2019 with Tommy John surgery. He could take over the closing role, but it is wise to start him as a set-up man. Lefty Alex Claudio pitched in a league-high 83 games last year. For the first time, he was used as a one-out guy, pitching in only 62 innings, striking out 44. He allowed an average exit velocity of 84.8 miles per hour. Fringe starter Freddy Peralta struck out 115 batters in 85 innings, but had a weak 5.29 ERA. Peralta's fastball (2454) has a slightly higher spin rate (in rpm) than his curveball (2424). Corbin Burnes, who tried out for the rotation after a great job in relief in 2018, was awful in 2019, with an 8.82 ERA in 49 innings. He did strike out 70 batters. For the Cubs and Blue Jays last year, David Phelps had a 3.41 ERA with 36 strikeouts in 34.1 innings. He employs a cutter with a good spin rate of 2411 rpm. Ray Black, acquired midseason from the Giants, struck out 18 batters in 16 innings with a 5.06 ERA last year. He had 45 Ks in 28.2 AAA innings. Black's fastball is deadly, averaging 98.2 mph with a 2612 rpm spin rate. Devin Williams made his MLB debut in 2019, striking out 14 batters in 13.2 innings with a 3.95 ERA. MLB Pipeline ranks Williams as Milwaukee's 13th best prospect. Mike Morin has played for five different teams since the start of 2017, and the Brewers could be his sixth. Last year for the Twins and Phillies, Morin had a 4.62 ERA with 26 strikeouts in 50.2 innings. Morin's specialty is his slow change-up, averaging 72.6 miles per hour, with a slugging against of .200. Jake Faria, a former Rays starter, had a 2.70 ERA in 10 innings for the Rays last year before being traded to the Brewers for Jesus Aguilar. Faria struggled in Milwaukee, allowing 11 earned runs in 8.2 innings. He struck out 82 batters in 67.1 AAA innings.

Catchers
With Yasmani Grandal leaving for the White Sox, the Brewers needed a new catcher. They acquired Omar Narvaez, who used to be on the White Sox, from Seattle. Now 28, Narvaez hit 22 home runs with a .278 average and .813 OPS last year. Manny Pina, slated to play in his 5th season with Milwaukee, hit seven home runs with a .724 OPS last year. Pina is a good pitch framer and is quick to throw to second base.

Infielders
With corner infielders Eric Thames, Jesus Aguilar, Mike Moustakas and Travis Shaw all gone, the Brewers are relying on their new acquisitions. Justin Smoak is one of them, signing a one year, $5 million deal with an option for 2021. With a 23.5 ft/s sprint speed, Smoak is one of baseball's slowest players. He hit 22 home runs with a .748 OPS. Smoak was an all-star in 2017, hitting 38 home runs. Top prospect Keston Hiura debuted in 2019, and was very good, hitting 19 home runs with a .303 average and a .938 OPS. Hiura had a strikeout issue, K'ing 30.7% of the time. Luis Urias, acquired from San Diego, has the chance to take over shortstop from Orlando Arcia. Urias hit .223 in 71 games last year, and was pushed out by Fernando Tatis Jr., plus the acquisition of Jurickson Profar. Urias was once a top-100 prospect in Major League Baseball. Arcia hit 15 home runs last year, but still had an awful .633 OPS. Jedd Gyorko will take over at third. A three time 20 home run hitter, Gyorko played in just 62 games last year, with an awful .498 OPS. He hit .262 with a .762 OPS in 2018. Utility infielder Brock Holt, the only player in postseason history with a cycle, comes to Milwaukee after being a fan favorite in Boston. Holt had a .297 average with a .771 OPS last year. Eric Sogard returns to Milwaukee, where he spent 2017 and 2018. Sogard had a career year last year in Toronto and Tampa Bay, with 13 home runs and a .290 average, plus an .810 OPS.

Outfielders
Christian Yelich really should have two MVPs right now. Yelich hit 44 home runs with 30 stolen bases, plus a league leading .329 average, .429 OBP, .671 slugging and 1.100 OPS. Yelich lead the league in slugging percentage in 2018, with a .598 mark, which was completely topped. Yelich had an average exit velocity of 93.1 mph last year. Lorenzo Cain might be the best defensive outfielder in baseball. Cain had 14 outs above average in 2019, which is really good, although a step down from his 22 in 2018. Cain was a major letdown at the plate, with 11 home runs, 18 stolen bases and a .697 OPS. Ryan Braun is still going at age 36. Braun hit 22 home runs with 11 stolen bases, a .285 average and an .849 OPS. Braun is not a good defender, so a future move to first base is very likely. Avisail Garcia is also an awful defender, and will be a DH most of the time. Garcia had a career high 20 home runs and 10 stolen bases in Tampa Bay last year, while hitting .282 with a .796 OPS. Garcia has very underrated speed, with a 28.8 ft/s sprint speed in 2019. Fourth outfielder Ben Gamel hit seven home runs with a .710 OPS. He had two outs above average last year, and can play all three outfield positions.

Prediction
The Brewers had one of the worst offseasons in a long time. They lost many, many stars, and they didn't bring in much talent. Because of that, I think that the Brewers have fallen out of being the favorites for a playoff spot. The Reds have leap-frogged them, and while Milwaukee is still better than the Cubs, I am predicting a 3rd place finish, and a playoff miss.
Posted by Carter at 5:03 PM