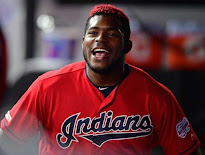 The Atlanta Braves have signed outfielder Yasiel Puig, according to reports from Mark Feinsand of MLB.com. The financial details have not yet been released or reported.
Puig brings a wacky personality and a good bat to the Braves offense. The will replace veteran outfielder Nick Markakis, who last week decided to opt-out of the 2020 MLB season. This move also comes right after top prospect Christian Pache sustained an ankle injury, although Pache should be good-to-go. Puig is mainly a right fieler, but can play left field if needed. The Braves' current left fielder is Marcell Ozuna, who could become the first full-time DH in team history. Puig isn't the best defender himself. He had zero outs above average in right field last year, but had two after being traded to Cleveland at the deadline in a three-team deal with Trevor Bauer being the headliner. Puig has decent speed, with a sprint speed of 28.2 ft/s last year, in the 79th percentile among players. He stole a career high 19 bases last year. The contract will most likely be a one year deal, and my prediction is that the salary will be between $3 million and $6 million.
Puig, 29, hit 24 home runs with 84 RBIs, 19 stolen bases, a .267 average and a .785 OPS in 611 Plate Appearances for the Cincinnati Reds and Cleveland Indians in 2019. In his seven year MLB career for the Reds, Indians and Los Angeles Dodgers, Puig has hit 132 homers with 415 RBIs, 79 stolen bases, a .277 batting average and an OPS of .823 in 3376 Plate Appearances. Puig had an average exit velocity of 89.9 mph last year.
Update: Puig failed his physical and is still a free agent.
Posted by Carter at 4:45 PM