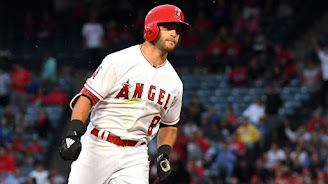 The Oakland Athletics have acquired IF Tommy La Stella from the Los Angeles Angels in exchange for IF Franklin Barreto.

A light-hitting fan favorite with the Cubs, La Stella left Chicago for the Angels before the 2019 season, and he blossomed into an all-star, hitting 16 home runs in 78 games with an .832 OPS, before a fractured leg lead to him only appearing in two more games for the season. With Matt Chapman at third base, La Stella won't need to play his secondary position, but he completes the Oakland infield. Aside from Chapman, the A's have Matt Olson at first base and Marcus Semien at shortstop, but their second baseman this year has been Tony Kemp, who has a career .679 OPS. All they give up is Barreto, a young infielder who was the last remaining piece in Oakland from the 2014 Josh Donaldson trade. Barreto has always been blocked in Oakland, but he should get a chance in Los Angeles. Barreto proved last year that he can hit at the minor league level, with 19 home runs, 15 stolen bases, a .295 average and an OPS of .926. He has played second base and shortstop for the A's, although he could probably play other positions if the Angels need him to.

Barreto, 24, is 0-for-10 this year with five runs scored for the A's. In his MLB career, all in Oakland, Barreto has hit nine home runs with three stolen bases, a .180 batting average and an OPS of .570 in 219 Plate Appearances.