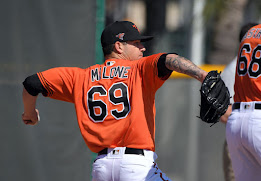 The Atlanta Braves have acquired LHP Tommy Milone from the Baltimore Orioles in exchange for two players to be named later.

After Max Fried, the Braves have a weak rotation, with Mike Soroka hurt and Touki Toussaint, Kyle Wright and Sean Newcomb struggling so badly that they were optioned. This led to both Josh Tomlin and Robbie Erlin joining the rotation, and Milone is a pretty good comparable to those two. Tomlin has pitched about 100 innings more than Milone in his career, but the two have the same ERA+ (91), and Erlin  is just under both of them, with a better career FIP. The journeyman lefty joined the Orioles this offseason and not only made the Opening Day roster, he started game one of the season after John Means was injured. Milone has had a decent start to this season, even better than last year, where he had a 1.5 bWAR, his best since 2015 (which was also 1.5, and he hadn't had a positive WAR in a season in between). Entering 2020, Milone's best K/9 in a season was 7.9 (in 2018, a season he only had 26.1 innings pitched), but he has a 9.5 mark through six starts this year. While he may not be the biggest name, Milone helps out the desperate-for-starting-pitching Braves. Two players to be named later sounds weird, but players not on the 60-man player pool cannot be traded, so it is almost guaranteed that the teams have an under-the-table agreement on who the players are, and that they will be announced when the season is over.