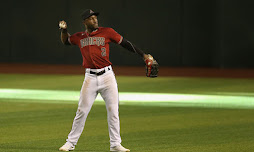 The Miami Marlins have acquired OF Starling Marte from the Arizona Diamondbacks in exchange for LHP Caleb Smith, RHP Humberto Mejia and LHP Julio Frias.

The Marlins are 14-15, but they are in second place in the NL East, so they will try to hold that spot and make the playoffs. Marte is an instant addition, although they gave up two starters in their rotation for him. Marte had at least 21 stolen bases in every season from 2013 to 2019, reaching 30 five times and 40 twice. He can also hit for average, with a .295 BA last year. The Diamondbacks acquired him in January for Brennan Malone and Liover Peguero, so this is a very good return. Smith is currently on the IL, but he can strike batters out and he isn't a free agent until 2024. On August 4th of last year, Smith had a 3.35 ERA, but he soon fell off. Mejia is a young pitcher from Panama that joined the rotation for three starts this year, although he was sent down. He was not a top-30 prospect in the Marlins system. Neither is Frias, who has never reached higher than Low-A.