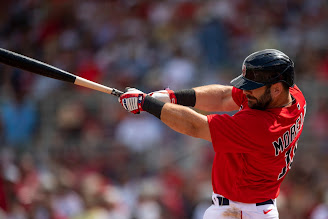 The San Diego Padres have acquired 1B Mitch Moreland from the Boston Red Sox in exchange for OF Jeisson Rosario and 3B Hudson Potts.

The Padres are going for it this year, after acquiring Trevor Rosenthal from the Royals yesterday and now Moreland today. The offense has been very good for San Diego this year, with catcher, left field and designated hitter being the exceptions. Tommy Pham can play left field, but DH'd a lot this year before going on the IL. He is a good hitter, although he had a weak start. Moreland will fill the DH spot, and he can spot Eric Hosmer a day at first base if necessary, although Hosmer is a four-time Gold Glover and the Padres would want him in the field (however, Moreland did win a Gold Glove in 2016). A four-time 20+ home run hitter, Moreland has power from the left side of the plate, and he is one of the few Red Sox that are hitting very well this year. Plus, he could be back for 2021, with a club option after this year. Moreland has familiarity with both GM AJ Preller and Manager Jayce Tingler, who both came from the Rangers organization, the team that drafted Moreland in 2007 and employed him through 2016.

While losing Moreland hurts for the Red Sox, as he was a fan favorite, had an .803 OPS in four seasons for the team and won a World Series in 2018, they need to look to the future. The new starting first baseman for the 11-22 Sox will be Bobby Dalbec, a 25 year old who is the team's 3rd best prospect (per MLB Pipeline) and was recalled following this trade. Plus, they got a good return. Both Potts and Rosario were ranked in the top 20 prospects in the Padres system, with Potts 16th and Rosario 19th. A 2016 first rounder, Potts is still very young, although he needs to figure it out at AA, as his 129 games at that level have not led to pretty stats. Potts has some experience at shortstop and second base, which is good as the Red Sox are very deep at third base with 23 year-old Rafael Devers becoming the face-of-the-franchise, and top prospect Tristan Casas also plays the position. Even Dalbec was originally a third baseman before moving to first. A left handed bat, Rosario reached High-A last year, and while he did not have a great batting average, at age 19 he walked 87 times.