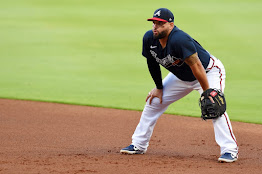 The San Diego Padres have acquired 1B Yonder Alonso from the Atlanta Braves in exchange for cash considerations.

Alonso will report to the Padres' alternate site, but if he returns to the big leagues, he will be a good veteran presence for the team. Alonso has spent 10 years in the major leagues, and four of them were with San Diego, from 2012-2015. Also, his brother-in-law is Padres star Manny Machado. Alonso is a lefty bat with some power, although his best season was far-and-away 2017, his only all-star year. The 7th overall pick in 2008, Alonso could back-up Eric Hosmer at first base, although with rosters currently at 28 men and shortening to 26 soon, it seems unlikely that we will see Alonso in the bigs this year. For a guy who hits for power, Alonso doesn't strikeout too much, with a K% of 18.3% over the last five seasons, and he does walk, with a BB% of 10.4% in that time. Signed by the White Sox last year, Alonso had an awful start to the season, and was released on July 3rd, but he was signed by the Rockies a week later, and improved in Colorado, with an .837 OPS. He signed with Atlanta on February 14th, but has not gotten into a game this year.