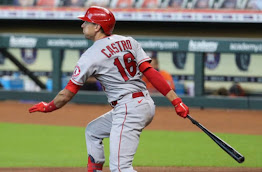 The San Diego Padres have acquired C Jason Castro from the Los Angeles Angels in exchange for RHP Gerardo Reyes.

The Padres have few holes offensively, and they cleared up one of them when they acquired Mitch Moreland today from Boston to be the designated hitter. Their biggest problem is behind the plate, with career .200 hitter Austin Hedges having a .614 OPS. While Hedges is good defensively, San Diego needs a replacement, and Castro is a fine defender. While I wouldn't call Castro a great, or even good hitter, he is better than Hedges. Castro hit 13 home runs with a 103 OPS+ last year. He has a strikeout problem, with a 30.8 K% over the past five seasons, and he has struck out over 100 times in five seasons, although Castro has only reached 500 Plate Appearances once.

A disappointing season for the Angels has led to them being sellers this year. Another former all-star in Tommy La Stella was dealt to Oakland, and now Castro is gone. Overall, signing Castro and trading him after 18 games isn't bad. Reyes has not played in the majors this year, and he debuted last year. In AAA last year, Reyes struck out 61 batters in 45.1 innings with a 3.57 ERA. When called up, Reyes allowed a bunch of runs but he had a 13.2 K/9. With the Angels having a much weaker bullpen than the Padres, Reyes should find a spot.