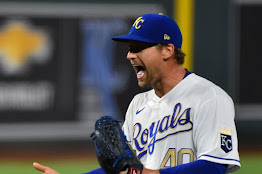 The San Diego Padres have acquired RHP Trevor Rosenthal from the Kansas City Royals in exchange for OF Edward Olivares and a player to be named later.

Before you can accurately describe how Trevor Rosenthal is as a player, you need to go back to when he broke into the league. Rosenthal pitched well in his first two major league seasons and became the closer of the St. Louis Cardinals. He registered over 100 saves for them over the next four seasons before Tommy John surgery cost him his 2018 season. Rosenthal signed a contract with three different teams last year and played for two of them, and he walked 26 batters in 15.1 innings, with a 13.50 ERA, but 17 strikeouts. Rosenthal joined the Royals this offseason, and has become their closer. While his seven walks in 14 games is short of good, Rosenthal has gotten back into a groove, and is close to being back to the player he once was. The Padres entered the season with one of the league's best bullpens, but they really need help now, as closer Kirby Yates went on the IL early into the season, and his replacement, Drew Pomeranz, soon joined him. Emilio Pagan is currently the closer, but he has struggled, along with Craig Stammen, Javy Guerra and Luis Perdomo. Rosenthal can help bring stability to the 'pen that could use some help as the Padres eye a playoff spot.

The Royals, currently sitting in the basement of the AL Central, get a decent return for a reclamation project after a month of usage, as Olivares will slide in as their 22nd best prospect, per MLB Pipeline. After trading away Brett Phillips to the Rays a couple of days ago, Olivares could take Phillips' spot in the outfield. Olivares will be another speedy Royal, as he has stolen at least 20 bases in three separate minor league seasons. He has shown flashes of power, and a good summer camp earned him his MLB debut this year, although a weak start to the season got him optioned. Alex Gordon, Whit Merrifield and Hunter Dozier are all regulars in the outfield, but the depth is pretty weak after that, with Phillips gone and former Padre Franchy Cordero injured, Bubba Starling seems to be the main competition for Olivares in Kansas City. The player to be named later will likely be a minor league prospect not on the 60-man player pool for the Padres, so they could wait until the season is over to complete the deal as players not in the player pool cannot be dealt.