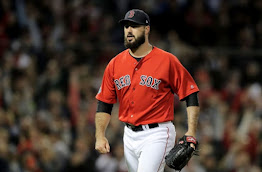 The Philadelphia Phillies have acquired RHPs Brandon Workman and Heath Hembree, as well as a player to be named later and cash considerations from the Boston Red Sox in exchange for RHPs Nick Pivetta and Connor Seabold.

The bright side to the 2020 Red Sox does not seem to exist. Starting off 8-18 with the worst record in the American League, Boston has a horrible rotation. Unfortunately, their bullpen was not much better and it gets even worse now with this trade. Workman, who never had an ERA under 3.00 or a K/9 of 9.0 or higher in his first four seasons, absolutely broke out in 2019, becoming the Boston closer, and finishing with a 1.88 ERA and 104 strikeouts in 71.2 innings. While he hasn't gotten off to the best start this year, he is an immediate upgrade to the Phillies bullpen that just lost its best reliever so far this year, Jose Alvarez. While Workman is a free agent after the season, Hembree has one more year left of arbitration, before becoming a free agent after the 2021 season. While he doesn't compare to Workman, Hembree has been a big part of the Boston 'pen since coming over for Jake Peavy in 2014. The Phillies acquired three relievers today, as David Hale was picked up from New York in the afternoon. While Pivetta has started and came out of the bullpen over the past four seasons, the return of the 2015 Jonathan Papelbon deal has allowed 10 runs in three games this year.

As an awful team, the Red Sox could get some value out of Workman and Hembree. This deal helps their tank for the number one pick, and it could get them a viable starting pitcher. 71 of Pivetta's 92 career games are starts, and while his career numbers are not good, he can strike a lot of batters out, and compared to the other options the Sox have, he is an improvement. They have really struggled this year, with David Price and Rick Porcello leaving, plus Chris Sale and Eduardo Rodriguez missing the season due to Tommy John and COVID, respectively. Seabold, a 2017 third rounder, has good minor league numbers, although he is 24 and has never pitched at the AAA level. Ranked as the 23rd best prospect in the Philadelphia system by MLB Pipeline, this return seems weak, although the main part of the trade (Workman) might only be a Phillies for about a month. Still, this could signify a weak pitching trade market this year, about 10 days away from the trade deadline.