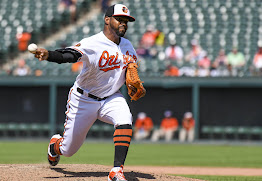 The Colorado Rockies have acquired RHP Michael Givens from the Baltimore Orioles in exchange for 1B Tyler Nevin, IF Terrin Vavra and a player to be named later.

Givens is one of the premier relief pitchers on the trade market this year, especially since he is not a rental. Givens will be a free agent after the 2021 season. That, plus his strong start to 2020 led to a three player return, including a former 1st and 3rd round picks. Debuting in 2015, Givens became a late inning reliever in Baltimore before becoming a part-time closer in Baltimore when Zack Britton was traded in 2018. While he lost the closing job to Cole Sulser this year, Givens is having an amazing season, and he is a big improvement to a bullpen that lost both Wade Davis and Scott Oberg, and has only three pitchers with an ERA under 4.00.

The return for Givens is nice, as the Orioles get two prospects ranked in the top 15 of the Rockies' system, per MLB Pipeline. Vavra is ranked 7th, while Nevin is 14th. A 2015 supplemental 1st rounder, Nevin is closer to the MLB. The son of former 1st overall pick and 12 year MLB veteran Phil Nevin, Tyler reached AA for the first time last year, but he had his worst offensive minor league season. Vavra is actually older than Nevin, but the 2018 3rd rounder has never reached a level higher than Single-A. Like in many other trades this week, the player to be named later is likely a player not on the 60 man player pool that will be revealed when the season is over.