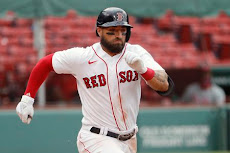 The Colorado Rockies have acquired OF Kevin Pillar from the Boston Red Sox in exchange for a player to be named later and international slot money.

Pillar has always been knows as a great defender, but with hitting skills that are just okay. A longtime center field with Toronto, Pillar has played all three outfield positions with Boston this year, but mostly right field. Pillar could platoon in center with Sam Hilliard until David Dahl returns from the IL. The lowly Red Sox have unloaded multiple players recently, and Pillar joins now joins the group.