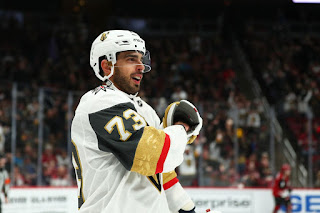 The Chicago Blackhawks have acquired F Brandon Pirri from the Vegas Golden Knights in exchange for F Dylan Sikura.

Throughout his career, Pirri has always been a player who just couldn't stay as a regular for a team. That was true with his first team, which was, well, the Chicago Blackhawks. A 2009 2nd rounder, Pirri played in 35 games over parts of four seasons for Chicago, including one game in the championship 2012-13 season. Right as he started to get a chance with the Blackhawks, he was traded to the Panthers, and in 2014-15 he put up one of the weirdest stat lines in NHL history, scoring 22 goals in 49 games, but recording just two assists. He has bounced from team-to-team since, and has appeared in games over the past three seasons for Vegas. His Golden Knights career started off strong, with 15 goals in 33 games, but he couldn't score in his stint this year. Pirri has proven that he can score at the NHL level, as he has averaged about 21 goals per 82 games in his career. He also has gaudy AHL numbers, with 230 points in 226 games dating back to 2012-13. If he plays for the Blackhawks AHL affiliate, he will add to his 200 career points in Rockford, the most ever for an IceHog. Sikura is like Pirri, as he has had success at the AHL level (although it doesn't match Pirri's numbers) but hasn't stuck around with the NHL club. However, he is still young but hasn't shown that he can score in the NHL yet.

Even though the Golden Knights wouldn't give Pirri a chance, they might give Sikura a look. While Pirri is more of a goal scorer, Sikura is a playmaker. He dominated at Northeastern University before making the jump to the NHL in 2017-18. He hasn't been able to prove that he's an NHL player, and his big shot came in 2018-19, when he appeared in 33 games. But, he had just points, all assists. The Blackhawks, a team that has often had weak depth, is a team that is much easier to crack than the stacked Golden Knights, so the Ontario native will face a bigger challenge.