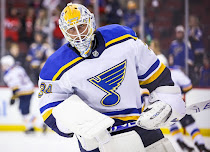 The Canadiens really need a backup goalie, as Carey Price started 58 of the 71 games that the Canadiens played, and 11 of those 71 were started by Keith Kinkaid and Charlie Lindgren, who each posted save percentages well under .900. The other two were started by Cayden Prime, and while the 21 year old could be the goalie of the future, he is not completely NHL ready. Allen is a big get, as while he has been inconsistent, he is a veteran who won the Stanley Cup (albeit as a backup) last year. Allen's $4.35 million cap hit brings the total cap space occupied by goaltenders up to $15 million in Montreal, but Allen is a free agent after the 2020-21 season. While Max Domi being an RFA is concerning cap wise, the Habs could trade him for a defenseman, an area of need for them. This trade is good considering that the third rounder was originally Washington's, acquired this past deadline for Ilya Kovalchuk, who was disappointing in the Capitals' playoff run.

For the Blues, they are still over the salary cap, even after unloading Allen. Jordan Binnington came back to Earth this year, and their next best backup goalie option is Ville Husso, who has zero games of NHL experience and a .909 save percentage in the AHL this past season. While Vladmir Tarasenko could go on LTIR, the Blues look very likely to lose captain Alex Pietrangelo in free agency. This trade helps, but opens up a big hole in net.