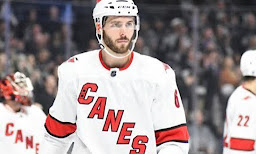 The Montreal Canadiens have acquired defenseman Joel Edmundson from the Carolina Hurricanes in exchange for a 2020 5th round pick.

The Canadiens need help on the left side of their defense, with Ben Chiarot, Victor Mete and Brett Kulak being their most prominent players on that side last year. Now, they acquire Edmundson, who is a pending UFA, but they get his rights. Most players do sign with a team after their rights are traded, and I would be surprised if Edmundson doesn't end up a Canadien. In his five year career, Edmundson has played over 60 games in each season, but has never reached 70. If the 2020-21 season is more than 70 games, then a healthy Edmundson should reach it for the first time. A 2019 Stanley Cup champion, he is definitely an improvement.

The Hurricanes have a bunch of defensemen, and they have five d-men signed for next year with a cap hit of at least $4 million. Three of them (Jaccob Slavin, Brady Skjei and Jake Gardiner) are left-handers, with another lefty, Hadyn Fleury, becoming an RFA. Edmundson didn't fit in, especially since he was going to leave as a free agent. The Canes get a fifth rounder back, and it would have been conditional normally, but the new CBA means that picks can not have a condition based on a player signing with a team, so the pick is automatically going to Carolina.