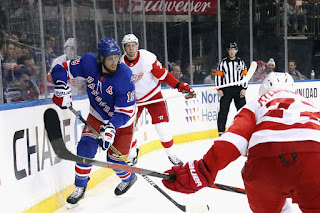 The Detroit Red Wings have acquired defenseman Marc Staal and a 2021 second round pick from the New York Rangers in exchange for future considerations.

Even though Ryan Strome and Tony DeAngelo are RFAs, the Rangers aren't in a terrible cap situation.  But, after this trade, they are able to clear up $5.7 million in cap space. While they give up a second round pick, it isn't that bad compared to last year's Patrick Marleau trade, when the Hurricanes got a first rounder for taking on Marleau's $6 million cap hit. After this trade, the Rangers have just over $20 million in cap space. They could possibly fit in a top free agent, plus Henrik Lundqvist's $8.5 million cap hit is coming off the books after this next season. Having two first round picks this year, including the first overall pick, and eight overall picks next year will ease the pain of losing the second rounder. Staal has been with the Rangers since he was a first round draft pick in 2005, and nearly played in 900 games for them. The veteran will be missed in the locker room, although his play has diminished over the years.

The Red Wings have been busy today, signing both Sam Gagner and Turner Elson to deals and now making this trade. Even after the deal, they are still around $6 million under the cap floor, although they will easily get over with Anthony Mantha, Tyler Bertuzzi and more becoming RFAs. The Wings could decide to buyout Staal, but with veteran defensemen Trevor Daley and Jonathan Ericsson all but officially gone, they could use Staal's leadership on the blue line. Getting a second round pick for a cap hit of $5.7 million for one year is not a bad idea for the Red Wings.