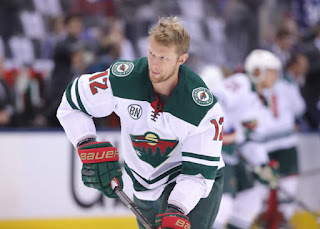 The Buffalo Sabres have acquired forward Eric Staal from the Minnesota Wild in exchange for forward Marcus Johansson.

For about the 50th year in a row, the Sabres are not a great team. Next year's roster will be drastically different from the 2019-20 squad, as only 10 players are signed for next year, Of those ten, two (Rasmus Dahlin and Henri Jokijarju) are on entry level deals, and two players combining for $15 million of cap space (Jeff Skinner and Kyle Okposo) scored 23 goals in total this past season. The Sabres, who will have eight RFAs this offseason, lack center depth, and Staal is an improvement. He can easily slide behind Jack Eichel and be Buffalo's second line center. With a $3.25 million cap hit and one more year left on his contract, Staal can be dealt at the trade deadline if he performs well, or even if he doesn't perform well with his new team. A former captain in Carolina, Staal was a teammate of Jeff Skinner, although the Sabres would want to keep Skinner with Eichel, and not move him down. In return, the Sabres give up Johansson, who played center for them but is best suited as a winger. Even at his age, Staal is an improvement, and he takes up less cap space. He had a 50.3% face-off percentage over his time in Minnesota, while Johansson had a 40.1% mark in 2019-20.

Johansson is a big injury risk, with a higher cap hit than Staal, and his peak hasn't been much better than Staal's average season. So, this deal is a head scratcher for Minnesota. Both are solid defensive players, but Johansson is an above average defender for a winger, but at center that doesn't hold up as well. He has only scored at least 20 goals twice, last in 2016-17. And, his 60 games this past season was his most since that year. If both Staal and Johansson were dealt for prospects and draft picks, Staal would get the better return. It is understandable if Johansson had more term on his contract, but he has one year left with a $4.5 million cap hit.