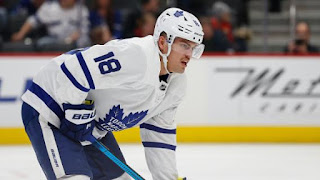 The New Jersey Devils have acquired forward Andreas Johnsson from the Toronto Maple Leafs in exchange for forward Joey Anderson.

The Maple Leafs' salary cap issues are no secret, and they got just a little bit worse when they gave Wayne Simmonds and TJ Brodie a combined $6.5 million in free agency. Johnsson being traded was inevitable, as he is a player that can be replaced, and he has a $3.4 million cap hit. The Maple Leafs decided not to trade two decent RFAs last year in Kasperi Kapanen and Johnsson when they had cap issues, and now both are in the Metropolitan division, as Kapanen is a Penguin. In return, they get Anderson, who can be a defensive forward on the right wing. Anderson had a successful AHL season last year, scoring 15 goals with 34 points in 44 games. The former 3rd rounder played in some NHL games over the past two seasons. He is currently an RFA, but his next deal likely won't eclipse $1 million and might be a two-way deal.

Anderson, 22, scored four goals with two assists for six points in 18 games for the Devils in 2019-20. In his NHL career, all in New Jersey, Anderson has eight goals with five assists for 13 points in 52 games.

The Devils are taking advantage of the Maple Leafs' salary cap situation, and they get pretty good value for Johnsson, who is signed for three more years. He scored 20 goals in 2018-19, but knee injuries hurt his 2019-20. He is a young left wing option for Lindy Ruff's squad. Their next order of business should be to get a defenseman. They have five NHL defenseman, and Damon Severson is the only signed past 2021-22 (he is a free agent after 2022-23).