Filling out a hypothetical Hall of Fame ballot 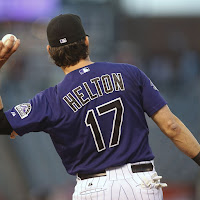 I don't have a Hall of Fame ballot. One day, I would like to change that, but that would be a long, long time from now. For the last few years, I've followed the Baseball Hall of Fame race pretty closely, thanks to Ryan Thibodaux (@NotMrTibbs on Twitter) and his team of trackers. I've always had an opinion on who should be in and who shouldn't, but I never wrote about it. So, here I am, finally writing an article on who would be on my ballot, if I had one.

Well, by this, I meant no-doubters for me. There is no definite Hall of Famer this year in the eyes of many voters, so I wouldn't be all that surprised if there were no inductees this year. But, obviously there is a reason why Bonds isn't in already, and it is not because of his play. Bonds had a chance to be an inductee prior to joining the Giants in 1993, but his San Francisco career sky-rocketed his play. His single-season home run record of 73 in 2001 highlights his case, although oddly enough, that was the only time he ever hit 50 or more. Still, Bonds eclipsed 30 big-flies in 14 different seasons, won seven MVPs, with eight Gold Gloves, 12 Silver Sluggers and a pair of batting titles, and he holds the MLB record for home runs, walks, and intentional walks. No steroids make you that good, and if they did, more players would have found a way to become that good by now. Bonds' ONE HUNDRED AND TWENTY intentional walks in 2004 at age 39 should get him in alone on the basis of fun and absurdity.

A lot of what I said about Bonds applies here. Clemens is more than qualified, but PEDs will keep him out. With seven Cy Youngs and the same amount of ERA titles, Clemens is easily a top-5 pitcher of all time. Like with Bonds' accolades, no steroid makes you this good. A 3.12 ERA in over 700 starts is very, very impressive, and his FIP is even better than that. Like Bonds, Clemens has some fun tidbits about his career, like his legendary stint in Toronto, lasting two seasons with two Cy Youngs, or his 1.87 ERA at age 42 in 2005. You can't vote for Bonds but not Clemens, or vice versa.

Schilling has been qualified for the hall, and his personal controversial political beliefs and transphobic tweets have probably contributed to him not getting inducted yet, especially when Mike Mussina, a good comparable to Schilling on the field, got in a few years ago. Plus, the Hall of Fame does not just consist of angels and trailblazers. Schilling's career stats are surprisingly lopsided towards the back-end of his career, but his lines from 1996 to 2004 are incredibly impressive. He also finished second in Cy Young voting three different times, but he never won one thanks to teammate Randy Johnson and an unstoppable 2004 Johan Santana.

This will come to a surprise for a lot of people, but I am a huge backer of the Helton for Hall of Fame movement. I even wrote a Twitter thread it last year. Especially now that Larry Walker got in last year, Helton should see a huge jump this year. While you could look at those tweets, I will sum it up here. Helton was a five-time all-star, making the team every year from 2000-2004. Maybe if Albert Pujols wasn't in his league, he could have made it more. That 2000-2004 peak is nuts if you look at it. Helton's lowest single-season OPS was 1.006. While he did tail off in his last 5-6 seasons, it wasn't as dramatic as other candidates. In his seventeen seasons, Helton hit under .300 in just five of them, although his age 23, 101 Plate Appearance 1997 season shouldn't count. He does have drastic home and road splits, as Coors Field plays as a factor, but an OPS of .855 on the road isn't bad either, and it isn't like it is easy to hit .345 at Coors over 1141 games.

Ramirez falls on the border between "no-doubter" and the next category on the list, but if you vote Bonds and Clemens, I guess Manny should be there too, especially with the weak ballot this year. While his openness about steroid use might scare away voters, you need to adjust for the era, just like you would if you were to vote if Honus Wagner and his career high 10 home runs were on the ballot. I'm not criticizing Wagner, but just making a point on how era adjustments should come into mind when making a voting decision. Back to the player in question, Ramirez is worthy. A 69.3 career bWAR with 555 homers and a .312 average is better than decent. He won nine silver sluggers, and has a .996 career OPS. Like I've said before, steroids probably don't make you that good at hitting.

The locks, but not the best

This tier consists of guys that I really think are Hall-of-Famers, but I wouldn't start crying if you didn't include them on your ballot (considering Helton's percentages, I've been a fair amount of sobbing). Rolen was a great defender who also was a pretty good hitter, unlike Omar Vizquel, who was only one of those things (more on him later). An eight-time Gold Glove winner and seven-time All-Star, Rolen's 70.1 career WAR floats him into Hall-of-Fame territory. His .855 OPS isn't too shabby either. By the way, that is the same as Helton's road OPS, so I better not see you leave him off your ballot.

Wagner is someone who is a Hall-of-Famer on his own, and his case is elevated by other relievers to be inducted in recent years. Wagner stands sixth all-time in saves, with 422. Lee Smith, who is above him in that category but doesn't have other stats as good as Wagner's, is in. So is Bruce Sutter, who has less saves, but worse overall numbers. Wagner has a 2.31 ERA with an 11.9 K/9 over 16 seasons. He played for a surprisingly high amount of teams, and performed for every single one of them. His 1.43 ERA in 71 games as a 38 year old in 2010 for the Braves is a fun one, especially considering that was Wagner's final season.

This tier consists of guys that I wouldn't be mad about leaving off my ballot. Jones is a guy that a lot of people love, and they have a point. From breaking into the league at age 19 in 1996, to about 2006, Jones was one of baseball's stars. He hit at least 30 home runs seven times, and he peaked in 2005, when he was the MVP runner-up to Pujols, but hit 51 home runs with a .922 OPS. With 434 home runs and an .823 OPS in his career, Jones' batting stats probably wouldn't be enough to put him over the line for me. However, his 10 Gold Gloves definitely will do that.

This is one pick that might seem weird to you, because it did to me at first. But, looking more into it, Abreu should be in consideration. This comparison to Hall-of-Famer Tony Gwynn says it all. Click on that link, and a lot of my argument for Abreu will be found. While you may not think of him as a Hall-of-Famer, he was an on-base machine in his career. He was only a two-time All-Star, and won just one Gold Glove and Silver Slugger each, but Abreu could often hit for over .300, with an OPS above .900 and 20-30 home run power. Doing all of those things combined five times, and a bunch of them independently in other seasons should help Abreu's case. He also has a 60.2 career WAR, and the border for potential Hall-of-Famers should be around 60.

Sheffield's place among other steroid users on the ballot is interesting. He seems to be much more innocent than the likes of Bonds, Clemens and Ramirez. While his career numbers are worse than those three, I like him as a 10th vote on this year's ballot. A five-time Silver Slugger with a 60.5 career WAR, Sheffield enjoyed five seasons with an OPS of at least 1.000, eight seasons with more than 30 home runs, and a career OPS+ of 140. Even with steroids, there is a case for Sheffield, but he never was suspended for it, so him being punished now seems a little bit unfair, but he isn't the only guy that applies to.

Why I didn't vote for these guys

I've never seen the appeal to Kent. His 55.4 WAR is under my personal 60 target line, and his career just does not stand out to me. He only had two seasons with an OPS over .900, and as I've stated before, Bonds and Helton were much more qualified for the 2000 MVP award, something that Kent voters use as justification.

These are both players that I thought of for the final spot before I went with Sheffield. Both are lefties who hover around the 60 WAR line in their career. Both have some impressive accolades, as Pettitte won five World Series, if that matters to you, and Buehrle won four Gold Gloves. However, I don't think that either have any impressive personal categories that make them Hall-of-Famers. If I had to vote for one, it probably would be Buehrle, as tie goes to the player who didn't take PEDs. Tim Hudson also falls into this category, and I am curious to see if he stays on the ballot for next year.

Once again, I considered putting down Sosa instead of Sheffield. An MVP who hit over 60 home runs in three different seasons, with 609 total in his career, Sheffield beats him in WAR, OPS and OPS+. Maybe I'd consider Sosa over Sheffield if there were no PED affiliations with him, but there is, so Sosa is a no-go for me.

I'm only putting him here because Hunter's nine Gold Gloves might earn him a couple of votes. His offense was not as good as defensive stars like Jones and Rolen, so he shouldn't be on the ballot next year.

If you vote for them, I will be mad

Sure, Vizquel won 11 Gold Gloves. But, offense is probably more important. Vizquel hit just 80 home runs over 24 seasons, and while he did rack up 2877 hits, playing for that long will help you get to that. Vizquel's .272 average and .688 OPS just shows that he wasn't a good hitter. Vizquel could easily get more votes than guys like Helton or Rolen this year, but please don't vote for him.