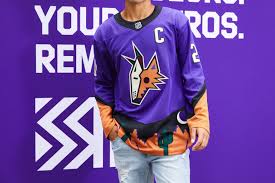 The NHL's "Reverse Retro" jersey initiative has been talked about a lot recently, and today we got an actual look at all 31 teams' alternates for the the upcoming season. Some are good, some actually follow the theme, and a select few are really bad. So, it's time to rank them.

My only theory for this choice is that the NHL originally planned to do a "whiteout" theme. They then changed it to the much better reverse retro, but accidentally sent the wrong memo to the Red Wings. That is where we get this mostly white monstrosity with some weird gray lines. To be fair, the Red Wings don't have any great retro jerseys to copy anyway.

It actually wasn't until I started writing this, about two hours after these released when I realized the North Stars connection. Still, the North Stars colors aren't good, and they have the most overrated jersey in NHL history. Wow, that felt good to get off of my chest. But still, the yellow looks really bad on the Wild logo.

Ok, ok, ok. Here's the beauty of this jersey. It is the same as their normal home jersey, but with a major twist. The twist is, and I know you aren't ready for this, but it's great. The blue is slightly darker. Also, the stripes are swapped. This is easily the laziest jersey of the bunch. The fisherman or even the wave jersey from the 1990s would have catapulted the ranking, but no, we get absolutely nothing here.

When I see this jersey, I feel like something is missing, and I don't that there is. These jerseys are just kind of boring. It is like their away jerseys, but with way, way, way too many stripes. The Todd McFarlane comet would've been nice, maybe with an orange twist.

This section here is the "pretty boring" section. The Leafs logo feels a little bit too big, especially for a logo without detail. The Panthers have a massive logo for example, but at least all of it is unique. This is just a symmetrical leaf. Also, from the photos we have seen, it looks more like a sweatshirt than a jersey for me, so hopefully it will look better in use.

One of the colors for the Predators is blue, and I feel that you could be a fan of the team and not know that. In this jersey, they crank up the blue, and it contributes to a nice looking logo, with a sick yellow eye. Besides the logo, there isn't much to love.

I don't know why they didn't choose to go with the black diagonal jerseys, as that is very similar to this, but better. I don't think this is close to the best jersey in Penguins history. I would have much rather had the baby blues or the gradient rather than this.

The Stars have had some fine jerseys before. This one is alright. The logo is cool enough, but just doesn't compare to the other jerseys teams are revealing. It is much better than the neon alternates the Stars previously unveiled. Also, the white behind the "Dallas Stars" name is a much different white than the rest of the jersey. I'm not sure why.

Everyone seems to have strong feeling about all of these jerseys, but the Bruins seem to be a collective "meh". There is nothing too special about them, and the team hasn't had any great jerseys in their history for this initiative. The old B and the bear on the shoulder patch are both nice. I really like all of the jerseys above the Bruins, so this feels like an appropriate average.

The Flyers succeeded at what the Predators tried. The black from the sleeve around the shoulders to the other sleeve mixes well with the orange in between. It is kind of boring, but it is a nice, clean look. I wouldn't be mad if this was the Flyers' normal home sweaters.

This 1940s inspired jersey mixes the red and black colors well, just like the Flyers did with black and orange. While I like the current logo rather than the one on this jersey, the old-timey "Black Hawks" spelling is a nice touch.

The Golden Knights kind of feel like if it is pet day, and you are the one kid in the class without a pet. Their lack of heritage brings them to the Las Vegas Thunder, a 1990s IHL team. That explains the "V" design with the silver and gold mixing against the red. It is a good look, and I like it more than their actual home jerseys. This V for Vegas jersey adds to the list of secret meanings on jerseys, something the team already had with their primary logo.

The Rangers are the only one of the three New York teams to bring back the right jersey, as the Statue of Liberty returns. The logo is great, but besides that the jersey is kind of bland. It is just a logo on a plain blue background, with two stripes by the bicep. Another weird thing is that from the photos we have been given, the logo looks oddly low on the jersey.

This is a play on the old red gradient jerseys, changing them to the Canucks' blue and green colors. I don't know what it is about it, maybe the white in between blue and green, or the gradient itself, but I really like this. However, a green and blue sled would have been better.

For teams without great retro jerseys, the Canadiens perfected what to do. Making a mostly blue jersey sounds like a weird idea for the team, but they perfected it. It looks nice, although it isn't as flashy as other ones.

People really seem to love this one. The green Devils jerseys never stood out to me, because the green was a weird addition. Flipping it to mostly green is a nice twist, like what the league was going for. It will be a great jersey come Christmas time, although unfortunately we won't see that this year.

I don't know why, but I find the next two to be really similar. The "Tampa Bay" font looks really nice. I do like the original, black design of this jersey more, but I guess you can't win them all.

The black shark is intimidating, and the broken stick in its mouth is a classic design the team still adopts. While the old teal jerseys were nice, these are good too, especially the sleeves, mixing black and teal.

This jersey is getting a fair amount of hate, which I find unfair. This logo is way, way better than the old logo that the Senators just ditched. The red looks nice, and unlike the Oilers, the abundance of stripes doesn't ruin the jersey.

Another public opinion that I don't understand is the Avalanche getting love while this one is disrespected. Both are essentially the same concept. The Jets are taking the timeless logo of the original Jets, and applying it here. While it isn't better than the blue and red jerseys they've recently used, it is nice, and you can't tell me that the navy and light blue don't make an amazing logo.

The Hurricanes used to be the Whalers. We know this. The Hurricanes have used the Whalers jerseys a lot recently, so using a Carolina design would be nice. I would have also taken a Whalers logo with red and black, like what the Avalanche and Jets did. It is in the top-10 solely because of the Whalers logo being great, although there is a lack of creativity here.

The Wild Wing jerseys might not have been what fans wanted, especially when the jersey that they did want is worn by Wild Wing on this jersey. I guess him wearing this jersey would be weird. It is still a cool jersey, with the best lettering in the game. Wild Wing's legs do look very marshmallowy, though.

This is an amazing logo. To be fair, the rest of the jersey doesn't match it, but the stars are everywhere, and the CBJ in the logo brings the point home. I feel confident saying this is a top-2 jersey in Blue Jackets history.

While the trumpet alternates that Mike Keenan refused to let the Blues wear would be fun, I like this one too. The red, gold and blue colors bounce off of each other well, and I've always loved that Blues logo.

Personally, I would have switched the shoulder and chest logos, so the "goat head" logo would be the main one. The swords are still a nice look, and the golden and blue stripes look great. The one bad thing about this is the "Buffalo" wording on the bottom.

Having the guts to bring back Blasty, especially when teams like the Islanders were afraid to bring back their ugly logos, makes this a win for the Flames. While the black, yellow and red look like an old Canucks jersey, the Flames deserve those colors more. I was expecting a C with more red, so I'm glad they did this.

Bring back the classic Nordiques logo: check. Add a reverse theme to it: check. Make something that still says "Colorado": check. The Avalanche hit it out of the park with this one.

The Capitals have had a bunch of great jerseys in their history. The current ones are really good. They also had the screaming eagle and Capitol Building on jerseys. They go with the eagle here, and update it to the red color of the franchise. The logo, bottom stripe and "C" all slant to the bottom left, which is a nice touch.

The Kachina jerseys are my favorite jersey of all-time. Since they are the Coyotes' alternates, they would have to impress me. They did exactly that, bringing back these alternates from the early 2000s. While they weren't great then, with a weird green color, changing that to purple completely fixes it. The logo and desert on the bottom is a little bit looney, but I like it. This is an all-time jersey right here.