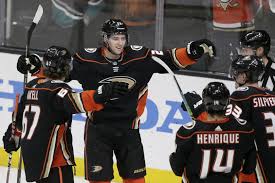 Not many things are going right for Ducks fans right now. The team is in shambles, with a bad salary cap situation, and their young talent has not blossomed yet. At least we're getting a new Mighty Ducks movie, right? Even in the trailer the Ducks look like the bad guys, so even the thing the franchise is most known for is negative towards them at the moment. The team said goodbye to Corey Perry last year, and Ryan Getzlaf soon should be next. Even John Gibson's career is taking a downturn. Either a blow-up or great luck should be coming to Anaheim in the next 365 days.

One Move I'd Make: Trade away Ryan Getzlaf.

The top line for the Ducks starts with a pair of 30 year olds who both have four years left on their contracts. Considering they've hit 30 goals once combined, that is not a great start. Both Adam Henrique and Jakob Silfverberg are nice players to have, but neither are legitimate first line players, and trading away Silfverberg instead of extending him in 2019 would have been the harder, but better move. Henrique led the team with 26 goals and 43 points, and was one of two players to appear in all 71 games for them. Silfverberg would be a nice secondary scorer for a playoff team, as he can consistently hit around 20 goals and 40 points, but he has never hit 25 goals or 50 points in a season. Their lineman would likely be Rickard Rakell, a 27 year old who has not hit 20 goals or 45 points since he scored 34 goals with 69 points in 2017-18. Ryan Getzlaf has not played in 70 games since 2016-17, although he was a game away before the season ended this year. 2011-12 was his last full season. His 29 assists in 2019-20 was his lowest since he was 20 years old in 2005-06. A free agent at the end of the year, it will be interesting to see if the Ducks shop Getzlaf at the trade deadline. Whoever his line mates are, they'll likely be a decade younger than him.  Danton Heinen came over at the trade deadline for Nick Ritchie in a deal that looks pretty good after Ritchie struggled with Boston earlier this year. Heinen scored three goals in nine games for Anaheim, averaging over 16 minutes a game, something he never did with the Bruins. Another trade deadline acquisition, Sonny Milano is a former first round pick who never broke out. He had five points in nine games for Anaheim. Former World Juniors hero Troy Terry has 28 points in 81 career games, spanning over three seasons. A late first rounder acquired when the Ducks traded away Frederik Andersen, Sam Steel only scored six goals in 65 games, with 16 assists. Max Jones and Max Comtois are 22 and 21 respectively, with few NHL games played. They are competing for the same left wing spot on the third line. Jones has more games played, but Comtois, who captained Team Canada at the World Juniors, has 0.46 points per game in his short NHL career. Former first rounders Trevor Zegras and Isac Lundestrom could both appear in games this year, but some more conditioning would be a better option. The fourth line will consist of veterans, starting with Derek Grant, who signed a three year deal in the offseason and will enter his third stint with the Ducks. He scored 14 goals in 49 games for them last year before a trade to Philadelphia. Carter Rowney was the other player to appear in every game for Anaheim in 2020-21. He has become a decent regular for the team in his two years since leaving Pittsburgh. Grinder Nicolas Deslauriers played in 59 games, his most since 2016-17, and racked up a career high 92 penalty minutes. David Backes had three assists in six games after coming in as a salary dump from Boston. He could see some fourth line time unless the Ducks decide to bury him in the AHL.

Soon the Ducks will have to make an important decision on whether to extend or trade Hampus Lindholm. He will be 27 a week into the season, and he's been a top-pairing defenseman for them for years. In two years he will be an unrestricted free agent. His partner, fellow defensive defenseman Josh Manson, will also be a UFA in two seasons. Manson is older than Lindholm but his right-handed shot has helped boost his value. Manson had just nine points in 50 games this past year. Cam Fowler has appeared in exactly 59 games in each of the last two seasons. For a player signed through 2025-26, the Ducks need him on the ice more. They got Fowler a new partner in reigning Stanley Cup winner Kevin Shattenkirk. Shattenkirk had a renaissance analytically for the Lightning last year, and had 34 points in 70 games. The top two pairings feel concrete, although the third pairing can go a lot of different ways. Former first rounder Jacob Larsson led Ducks defensemen with 60 games played last year, but he has a career CF% of 45.1. 31 year old Kodie Curran signed a two year deal after he put him 49 points in 48 games in Sweden. Curran's main competition is former Capitals prospect Christian Djoos, who had three points in a nine game stint with Anaheim. Josh Mahura and Brendan Guhle both have upside, and Jani Hakanpaa has NHL experience.

There was a point in time where John Gibson was 23 and considered by many as a top-10 goalie in the league, thanks to a high GSAA. Gibson's GSAA turned negative in 2019-20, down to -8.66. He also saw career worsts in GAA (3.00) and SV% (.904). It doesn't help that Ryan Miller is gone, and no one was brought in to back-up Gibson. The best option right now is Anthony Stolarz, who only has 26 career games but is less than a year younger than Gibson. He had a .922 SV% in 39 AHL games last year, and saved 34 of the 36 shots he faced in his one start for the Ducks last year.

Despite Vegas, Colorado and St. Louis all in the same division in the Ducks, the path to the postseason for Anaheim is easier than you would think considering that four teams from each division are expected to be making the postseason. The Ducks would have to beat out the Sharks, Wild and Coyotes to be in the postseason, which isn't too bad. However, in another rebuilding year, the Ducks will fall short and finish 7th in this revamped Pacific Division.