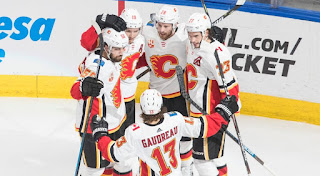 In an offseason where teams tried to stay with what they had as best as possible, the Calgary Flames did a lot. While nothing was groundbreaking, a lot of shake-ups were made by a front office that doesn't want to wait. They finished 3rd in the Pacific Division, and now in a weaker Canadian Division, they have a chance to make some noise in front of their whole country, although they kind of already did after stealing a few notable players from one specific rival.

One Move I'd Make: Re-sign Travis Hamonic to a one year deal.

Johnny Gaudreau is on the long list of people who just want to forget about the last year. After a career year in 2018-19, finishing with 99 points, Gaudreau's point total in 2019-20 (58) was less than his assist total in the two years prior (60 and 63). He scored just 18 goals, and had his name floated in trade talks. He is only two years way from being a UFA, so 2020-21 will be huge on determining his future in Calgary. Gaudreau's longtime center, Sean Monahan, also had a down year following a season where he averaged over a point per game. Monahan scored 22 times and 48 points, both his lowest since his rookie year of 2013-14. He did have the lowest shooting percentage of his career, which explains the goal drought, but just about every stat but face-off percentage went down for him. Elias Lindholm continued to succeed in Calgary. While his assist total was cut in half, down to 25 from 51, which tanked his total points, Lindholm scored a career high 29 times, the most on his line. For now, this top line is pretty safe. The best player on the team might not even be on that line. Matthew Tkachuk led the team with 61 points, and 23 of them were goals. While all of the top line members are Lady Byng candidates, Tkachuk is certainly not, as he had 74 penalty minutes in 69 games. He had stable linemates in Mikael Backlund and Andrew Mangiapane. Backlund is the definition of a two-way second line center. In each of the past five seasons, he has put up at least 45 points, and he kills penalties, is a constant Selke candidate, and has scored 20 goals three times. A former 6th round pick, Mangiapane broke out in 2019-20, scoring 17 goals with 15 assists. Sam Bennett has never lived up to his 4th overall pick potential, and he just had his worst offensive season, scoring eight goals with four assists in 52 games. He doesn't kill penalties, and has played on the power play, but being a third line center seems like his peak. Milan Lucic had 20 points in 68 games and had 198 hits, so he isn't a bad bottom-six winger, but he is obviously overpaid. Oddly enough, Lucic has always had an above average Corsi, even when he was on Edmonton, which can help prove that the stat can be misleading. Dillon Dube played in a career high 45 games and scored six times. The whole Lucic - Bennett - Dube line played well in the postseason, with Dube scoring four times, Bennett five times and Lucic once, but he had five assists. Derek Ryan had a down season Corsi-wise, but 2019-20 was only slightly below average for him in scoring, as he finished with 10 goals and 29 points in 68 games. Having him at fourth line center is a luxury most teams don't have. The Flames revamped the wingers around Ryan this offseason, bringing in Joakim Nordstrom, Josh Leivo and Dominik Simon. Leivo probably has the most potential of the group, as he had 19 points in 36 games for the rival Canucks last year. Simon has been a part of the Penguins for parts of five seasons before they did not tender him a qualifying offer. He scored seven times with 15 assists in 64 games. Nordstrom is a penalty kill specialist who did not have a good 2019-20 at all with Boston. A 2015 4th round pick, Glenn Gawdin lit up the OHL and has fared well in the AHL. In 2019-20 for the Stockton Heat, Gawdin scored 16 times with 31 assists in 53 games.

The undrafted Mark Giordano is back for his 15th season as a Flame. After a Norris winning 2018-19 season, Giordano went back to what he did the two seasons prior to 2018-19, with 31 points in 60 games. He had a Corsi well above average again, but now, he will have a new partner, as TJ Brodie left for Toronto. That partner is longtime division rival Chris Tanev, who is one of three former Canucks to join the Flames this offseason. Injuries have been a problem for him, but Tanev has averaged near or over 20 minutes a game for the past seven seasons. Before 2019-20, he had never taken more than 18 penalty minutes in a season, but he had 41 last year. Former 5th overall pick Noah Hanifin regressed a little bit in 2019-20, as his CF% decreased and his points decreased to 22. He shot more, averaging 1.89 shots per game, a sizable increase on the 1.45 from the year before. Rasmus Andersson may not live up to the six year, $27.3 million extension he signed, but for now he is a quality second pairing defenseman for Calgary. He took a jump in ice time by almost four minutes a game well. 2017 first rounder missed the whole season with a torn ACL after posting three points in 24 games in 2014-15. He's been playing in his home country of Finland, and has 19 points in 19 games. It looks like he's back to speed. Oliver Kylington isn't really an offensive defenseman at all, but he can contribute defensively. He's young and this season will be a big opportunity for him to grow. The Flames signed former Lightning 5th round pick Nikita Nesterov, who spent the last three seasons in the KHL. He had 23 points in 53 games last year. The Flames are thin defensively so bringing back Travis Hamonic or just signing any experienced defenseman would be a good idea if they could make it work with their limited cap space.

The third and final ex-Canuck to join the Flames, Jacob Markstrom is the new starting goaltender in Calgary. With a lot of goalies hitting unrestricted free agency this offseason, the goalie market crashed, but Markstrom still made out handsomely. He signed a six year deal worth $36 million. Markstrom is coming off of a career season, with career highs in SV% (.918) and GSAA (11.40). His 2.75 GAA isn't great, but the Vancouver defense in front of him wasn't great. Backup David Rittich regressed after a respectable first full season. Rittich had a .907 SV% with a 2.97 GAA, and his GSAA turned negative. Louis Domingue has six years of backup experience. He did play for Vancouver last year, but it was only one game so it barely counts. In 16 appearances for the Devils, Domingue was terrible.

The Flames don't have to deal with the Golden Knights now, and the big, strong team entering their division is the Maple Leafs, who technically didn't really make the playoffs last year. While I'm not saying that the Flames are better than Toronto, a weakened North Division will help lead them to a 2nd place finish and a playoff birth in 2020-21.