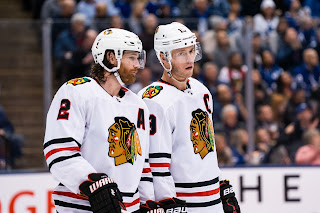 The Blackhawks made the playoffs in 2019-20, but that's where the success ends. The team didn't deserve to be there, as they finished last in the Central Division, and they were invited to the bubble so there would be an even amount of teams in the West. While they actually beat the Oilers, they were crushed by Vegas, and in the offseason they told fans that they were rebuilding. Between the official announcement of the 2020-21 season and now, the Blackhawks have already lost two promising young players to injuries. At least they now have the Red Wings to beat up on.

One Move I'd Make: Acquire any available goalie, even David Ayres.

A lot of how the Blackhawks' forward core will be lined up will depend on the injury report for Kirby Dach. Dach was the captain of Team Canada at the World Juniors but suffered an arm injury that will cause him to miss the rest of the tournament and some NHL time. It would be a huge loss for Chicago, as the 2019 3rd overall pick is a huge part of their rebuilding process. Dach played in 64 games last year, and scored eight times with 15 assists. When he's healthy, you can pencil him in as the second line center. It would make sense to have Patrick Kane with Dach, to help Dach grow, especially since Kane generally doesn't play with Jonathan Toews. Kane is coming off another great season, scoring 33 goals with 51 assists for 81 points in 70 games. He's only missed one game in the past five seasons. Jonathan Toews fell back down from his surprise 35 goal, 81 point 2018-19, scoring 18 times and finishing with 60 points. He probably would have hit it in 82 games, but it was the first time in his 13 year career he didn't hit 20 goals.  Toews was still a big penalty kill presence last year. Toews and Kane led the Blackhawks in the playoffs, with nine points in nine games. Kane got a stable linemate in Dominik Kubalik, who was a 24 year old rookie. Kubalik scored 30 goals in 68 games, and finished 3rd in Calder voting, and was the highest among rookie forwards. Toews' longtime linemate Brandon Saad was traded again, meaning that Alex DeBrincat should be on the top line full-time. After a 41 goal 2018-19 season, DeBrincat scored just 18 times last year, and his 45 points were the lowest in his three year career. If he can play in all 56 games this year, and judging by the fact that he hasn't missed an NHL game yet, he should, DeBrincat can easy score at a 25-30 goal pace. Plus, he just turned 23. For now, the winger on Dach and Kane's line remains a mystery, especially after Alex Nylander had knee surgery, ending his season. The Blackhawks signed Pius Suter from Switzerland in hopes that he would become Kubalik 2.0. Suter is 24 and scored 30 goals with 53 points in 50 games in the Swiss-A league last year. He has five points in six games there this year. I like Suter on Dylan Strome's third line more, to give Strome a promising winger. The Blackhawks brought in Mattias Janmark from the rival Stars, who has showed middle-six winger qualities. He only scored six goals last year, but had 21 points in 62 games. Janmark is a defensive winger who would fit nicely on a Blackhawks team with aging depth. Between now and January 13th, the Blackhawks need to sign Dylan Strome, and then figure out what line he'll be on. With Dach out to start, that looks like the second line with Kane. Regularly, he should center line three. Like Dach and Toews, Strome was once the 3rd overall pick. He scored 12 goals with 26 assists in 58 games last year, and has averaged .77 points per game since coming over from Arizona. The last four spots are where things get messy, with at least six legitimate candidates. Both Ryan Carpenter and David Kampf played a lot of penalty kill for the Blackhawks last year, even more than Toews. Kampf scored eight times while Carpenter had 15 points, one less than Kampf. Both are alright fourth line options. Lucas Wallmark seems like a lock for the the fourth line center spot. He scored 12 goals with 25 points in 67 games for the Hurricanes and Panthers last year. That's three spots, making one of Matthew Highmore, Andrew Shaw and Zack Smith land the final spot. Both Shaw and Smith are veterans with injury history. In his return to Chicago last year, Shaw had 10 points in 26 games, before the concussions stepped in. If Shaw can stay healthy he'll get the spot, but that is a big if. Smith is basically just counting $3.25 million against the cap and that's all. He came over from Ottawa and saw his average ice time drop by well over four minutes a game. His four goals and 11 points were his lowest since his 37 game 2014-15. Highmore is the youngest of the group at 24. He scored three goals in nine playoff games, which was more than the two he had in 36 regular season games.

Duncan Keith looked washed after a really bad 2017-18 season. But now, at age 37, he's still serviceable. Keith had 27 points in 61 games, and his 49 CF% was higher than the average Blackhawk. Maybe he shouldn't be averaging 24 minutes and 23 seconds a night like he was last year, but the team is still happy to have him. You can't say the same about Brent Seabrook, who was never on Keith's level but is a nightmare now. He's getting paid nearly $7 million a year and he had four points in 32 games last year, with a -2.2 GAR, and in 2018-19 he had a -9.3 GAR, so things aren't going well. There's a good chance he won't be a starter this year. The Blackhawks will pair 20 year old Adam Boqvist, who they drafted 8th overall in 2018, with Keith. Boqvist debuted last year and played in 41 games, finishing with 13 points. He has a lot of offensive potential. Calvin de Haan played in just 29 games last year, but blocked 73 shots with 93 hits. Blocking shots is what he does best, with at least 100 in each of the five seasons that he has played in at least 50 games. The Blackhawks are hoping that 2017 2nd rounder Ian Mitchell can replace Seabrook. The 21 year old scored 10 goals with 22 assists for 32 points in 36 games at the University of Denver last year. The Blackhawks lost a Brandon Saad trade for the third time this offseason, sending him to Colorado for Nikita Zadorov. Zadorov is a six-foot-six defensive defenseman who the Blackhawks hope can be a shutdown defender for them. He really wasn't that in Colorado, as he has a career CF% of 46.7, which is brought down by his 67 games as a teenager with the pre-Eichel Sabres. He's entering his 8th season, but he's only 25 years old. His partner will be another big and physical guy in six-foot-four Connor Murphy, whose entering year number four in Chicago. Murphy's 19 points were a career high, and he only played in 58 games. He averaged over 21 minutes on ice a night, and blocked 138 shots. The Blackhawks claimed Nick Seeler from the Wild midseason, and he played in six games for them. In 105 career games, Seeler has 12 points and 100 penalty minutes.

The Blackhawks let Corey Crawford leave for New Jersey, and didn't bring in anyone to replace him, so their goalies had 0 combined starts for them last year. Malcolm Subban came over from Vegas in the question Robin Lehner trade. He had an .890 SV% in 21 games last year, and an .899 SV% in his career. Collin Delia had some really good games in 2018-19, but struggled at the end of the season and finished with a .908 SV%. In the AHL last year, Delia played in 32 games with a .912 SV%. The third option is Kevin Lankinen, a 25 year old Fin who had a .909 SV% in 21 AHL games last year. Whoever the goalie of the future is on Chicago, it's probably not here.

The Blackhawks aren't exactly going anywhere this year. They said that themselves. Especially with Subban and Delia in goal, they are doomed for a last place finish. Luckily, the Red Wings are in their division, but even Detroit has a chance against them. The only thing to make this a positive year is development from Dach, Suter, Boqvist, Mitchell and more.