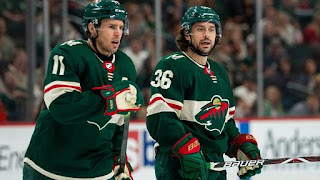 It feels like it should be the time for the Wild to either blow up or go for it. They've failed to pick a side over the past few years, sometimes making seller moves (trading away Jason Zucker, Charlie Coyle and Nino Niederreiter), but also buyer moves (getting Nick Bonino, not trading their top-four). This indecisiveness has led them down a (seemingly) path of eternal mediocrity. It feels like it's time something changed, and with a bunch of pending free agents, the change is probably headed downward.

but at least Best Move: Trading a 4th round pick and Luke Kunin to Nashville for Nick Bonino, a 2nd and a 3rd round pick.

One Move I'd Make: Trade Alex Stalock to the Oilers.

The player who led the Wild in points was probably the most ideal player to lead them in points. In his first full season with the Wild, Kevin Fiala scored 23 goals with 54 points, and he's only 24 years old. He scored three goals in four playoff games. Another season like that, and he'll get paid as an RFA after 2020-21. The Wild finally got Kirill Kaprizov to come over from the KHL. One of the top prospects in hockey, Kaprizov scored 33 goals with 62 points in 57 KHL games. He'll be a top-six forward this year. Zach Parise is 36 and has five years left on his contract, but at least he still led the team with 25 goals last year. Parise is mainly a power play specialist, scoring 12 of his goals on the man advantage. The team is lacking a top-six center, which means that Marcus Johansson might be the first line center. He's played his best hockey on the wing, making the Wild giving up Eric Staal for Johansson questionable. Johansson scored just nine goals with 30 points in 60 games for the Sabres last year. His last 20+ goal season was 2016-17. When all the hype about his lizard-like abilities died down, Mats Zuccarello quietly scored 15 goals in 65 games, with 37 points. He's 33 and probably overpaid, but he still gave Minnesota second line production last year. Arm surgery has him out for at least the start of the season, but I'll keep him in the projected lines since he might not miss significant time. The guy who would replace Zuccarello for now is Jordan Greenway, who is 10 inches taller than Zuccarello. The physical forward played in 67 games last year, and recorded 28 points. Former first rounder Joel Eriksson Ek had a career high 29 points in 62 games last year, but he had a career low 47.6 CF%. The Wild made a great move upgrading Luke Kunin into Nick Bonino. Bonino scored 18 goals with 35 points in 2019-20, and he is a great two-way center who can kill penalties. It's not a stretch that he could be their first line center. Minnesota native Nick Bjugstad has had a rough last few years. A 49 point scorer in 2017-18, Bjugstad was sidelined by injuries and played in just 13 games, with two points in them. For the first time in his career, Marcus Foligno actually outscored his brother Nick, 11 to 10. Marcus finished with a career high 25 points in 59 games. He also had an above average 51.4 CF%. Ryan Hartman finished with 20 points, and was one goal away from hitting double digits for the fourth year in a row. He kills penalties, and had a career high 9.2 GAR last year. Victor Rask's career has fallen off a cliff since leaving Carolina. He had 13 points in 43 games last year, although he did actually improve from his 2018-19 season. 25 year old German Nico Sturm will get a spot in the lineup with Zuccarello out. He has two assists in eight career NHL games, with six of them coming last year. After a 32 point AHL campaign, Sturm scored his first career goal in the postseason. The Wild drafted Marco Rossi ninth overall this year. Rossi scored 39 goals with 120 points in 56 OHL games last year. He could start the year with the team, and if he does, he'll start.

Ryan Suter is in the same bad contract situation as Parise. Suter is still on the border of elite, as he had 48 points in 69 games last year, and averaged 24 minutes and 38 seconds on ice a night. The Wild have formed an elite top pairing with Suter and Jared Spurgeon, who signed a seven year extension. Spurgeon scored 12 goals with 32 points in 62 games, and received Norris votes for the third time in four years, and Byng votes for the sixth straight season. Spurgeon had a 52.3 CF%, which was higher than his partner. Mathew Dumba won the King Clancy award in the offseason, and survived trade rumors. Dumba had 24 points in 69 games, which was only two points more than he had in 37 less games in the previous season. Defense-only defenseman Jonas Brodin was extended for six years after this year. Brodin had a career high 28 points in 69 games, with a GAR of 11.8. There's a big drop-off to the third pairing, with Carson Soucy being the one lock. Soucy scored seven goals with seven assists in 55 games, and earned a three year extension with a $2.75 million cap hit. Brad Hunt has the lead on oft-injured Greg Pateryn for the final spot. Hunt scored eight goals with 19 points in 59 games last year, and played on the second power play unit. Pateryn played in 80 games in 2018-19, but had three assists in 20 games last year.

The one known constant in the goalie rotation for Minnesota is Cam Talbot, who comes in on a three year deal. Talbot had a .919 SV% with a 2.63 GAA in 26 games for the Flames last year. Being overused hurt his stats in the prior two seasons, but Talbot has been a stable goalie for a long time. Backup Alex Stalock is out with an upper body injury for now. Stalock had a .910 SV% in 38 games last year, and started all four playoff games for the Wild against the Canucks. If Stalock misses time, Talbot's backup will be top goalie prospect Kaapo Kahkonen, who had a .913 SV% in five NHL games last year. In the AHL, Kahkonen played in 34 games with a .927 SV%.

Mediocrity is the Wild's ally. They were born in it, molded by it. Even with an open spot in the West Division, guarded by the Arizona Coyotes of all teams, the Wild will have a tough time getting in this year. I predict that they'll finish in 5th place, missing the postseason.