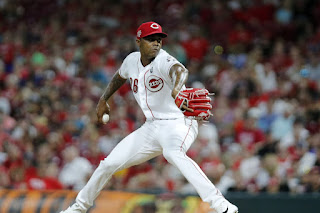 The Los Angeles Angels have acquired RHP Raisel Iglesias and cash from the Cincinnati Reds in exchange for RHP Noe Ramirez and a player to be named later.

Right off the bat, this trade seems confusing for the Reds. Their pitching staff, the main reason why the team made the wild card round in 2020, has already been decimated. Cy Young winner Trevor Bauer is on his way out, as well as rotation mate Anthony DeSclafani. Nate Jones, Robert Stephenson and Archie Bradley, who all pitched in double digit games in 2020, will likely be gone, with Stephenson already being traded to Colorado. So, trading their closer seems like an odd move. Iglesias is on the wrong side of 30, but has been a mainstay of the bullpen since transitioning from a starter in 2016. Besides 2019, all of his seasons in the pen have ended with an ERA under 3.00, including this past year. With the Reds looking to shed salary, like many other MLB teams this offseason, Iglesias was the first big piece to go. He is owed $9.125 million in 2021, but will be a free agent afterwards. In return, they get Ramirez, who is about two weeks older than Iglesias. He struck out a lot of batters in 2018 and 2019, but while his ERA improved in 2020, his strikeout rate plummeted. He seems like a 7th inning reliever at best. Ramirez will earn $1.1 million in 2021, with two years of control afterwards. Since 2017, the year he joined the Angels, Ramirez has eliminated his former main pitch, his sinker, while throwing his fastball more to compliment his changeup and curveball. A slow pitch at 88.7 mph on average, Ramirez's fastball held batters to .071 average in 2020, and was thrown 36 percent of the time.

New General Manager Perry Minasian makes a really good first trade here. While the relevancy of the player to be named is yet to be revealed, Iglesias is a nice addition to the Angels' bullpen. The closing role was mostly occupied by Ty Buttrey in 2020, who struggled. Mike Mayers, Felix Pena and Matt Andriese all had multiple saves as well. Acquiring Iglesias gives them a concrete closer for 2021, and there are still some good bullpen options on the open market. Iglesias throws a hard fastball, averaging 96 miles an hour in 2020, and held batters to a career best .195 xBA with a 2.50 xERA.