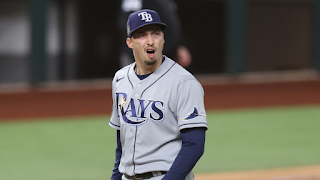 The San Diego Padres have acquired LHP Blake Snell from the Tampa Bay Rays in exchange for RHPs Luis Patino and Cole Wilcox, plus catchers Francisco Mejia and Blake Hunt. Wow. This is supposed to be the part where I explain the trade but I'm still a little bit surprised, so give me a sec. Wow. Ok, I'm ready to go.

The Padres became legitimate contenders last year when they went 37-23, finishing second in both the NL West and Major League Baseball. Their one goal this offseason was to find a way to take down the only team that did better than them, the Dodgers. They tried that when they acquired Mike Clevinger from Cleveland at the deadline, but with Clevinger out for the season with Tommy John surgery, they decided they had to go bigger. A potential solution could have been to sign Clevinger's ex-teammate, Trevor Bauer. But, Snell is younger, and on a much better contract. He's under contract for the next three seasons, and the most amount of money he will make in one year is the $16 million he'll earn in 2023. He's also only earning $10.5 million this year, much less than Bauer will. Snell won the 2018 AL Cy Young award with a 1.89 ERA, and he is a premier strikeout starter in the league, with a K% of at least 31 for the past three seasons. His best pitch is his slider, which allowed just one hit last year, and he threw it 131 times. He showed in the World Series that he can pitch against the Dodgers, dominating them in game six before being pulled early, just for the Rays to immediately blow the game, and lose the series. The price to pay is very hefty, but barring injury, Snell will be well worth it in a rotation with Dinelson Lamet, Zach Davies, Chris Paddack and in 2022, Clevinger.

For Rays fans, this has to be a terrible feeling. The team is known for trading away talent questionably, and while most of the time it ends up well for the team, it always hurts. This one might be the worst blow, right after the team went to the World Series, and right after Snell was pulled when he should not have been in Game 6. The return package is good, but still, this has to be frustrating. Patino is the headliner, and while he was the third prospect in the Padres system per MLB Pipeline, he is ranked 23rd in all of baseball, giving the Rays seven players in the top 100. He debuted in 2020, mostly as a reliever, and while he didn't blow anyone away, he was just 20 years old. Wilcox, a third rounder in this year's draft, was ranked seventh in the Padres organization. Part of the reason why he fell to the third round is concern with being able to sign him, but he set a record for a third round pick by signing a $3.3 million signing bonus. The Rays' big need entering 2021 was a catcher, as upgrading on Mike Zunino with a younger and better player was a must. They did bring back Zunino, but Mejia has a chance to overtake him. Once a top catching prospect in the game, the Padres got Mejia when they traded Brad Hand and Adam Cimber to Cleveland. He hasn't performed offensively when given a chance, and his only positive year was 2019, when he played in 79 games, and had a .754 OPS. He struggled in 17 games last year, but he is still relatively young. Hunt was ranked 14th in the Padres system. A 2017 second rounder, he's grown   defensively since being drafted, although his offensive numbers aren't great in the minors.