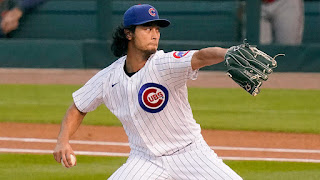 The Padres are going for it, if last night's trade for Blake Snell didn't make that obvious. Darvish is six years older than Snell, but is coming off a renaissance season in 2020. Darvish finished 2nd in NL Cy Young voting, and 14th in MVP. Darvish has always been a strikeout machine, and his 11.1 K/9 in his career is an all-time record. Seriously. That's better than the likes of Roger Clemens, Pedro Martinez, Randy Johnson, Clayton Kershaw. You name him, Darvish has a better K/9. It's crazy that he'll be the second best starter next year, with Dinelson Lamet being the third starter. The Padres don't give up a top-10 prospect in this deal, and the main piece going back is Davies, who Darvish is much better than. The Padres also get Caratini, Darvish's personal catcher, in this deal. In his four seasons, Caratini was only an above average hitter in 2019, when he finished with a 105 OPS+.

The Cubs want to cut payroll, but this deal still is bad for them. Darvish is owed $22 million, $19 million and $18 million in the next three seasons, respectively. While that is a lot of money, it's cheap for the production Darvish gave them in 2020. While selling high on a 34 is a smart concept, it cheapens out when the team cheapens out, and when the team is still a contender. Plus, the package is unimpressive. They failed to acquire a top-10 prospect in the Padres organization, and the four prospects look like extreme lottery tickets. The Cubs saw Davies a lot when he played for the Brewers, and while he was really good in 2020, he does not throw hard at all, or strike guys out. Preciado is ranked as the highest prospect of the group by MLB Pipeline, and was number 11 in the San Diego organization prior to the deal. He's still legally a minor at age 17, and has no minor league experience whatsoever. He's a switch hitter who signed with the Padres for a $1.3 million signing bonus, the most ever for a kid out of Panama. A 2020 2nd rounder, Caissie is an 18 year old Canadian who was drafted out of Notre Dame High School. The third prospect in the deal with no minor league experience, Mena was 15th overall in the Padres system after earning a $2.2 million signing bonus as a 16 year old. Now 18, Mena has great speed and is a good defender in the outfield. Santana finally gives me some stats to report, as the 20 year old formerly ranked 16th in the organization played in the Arizona League in 2019. He hit well there, and is said to be San Diego's best signing from the 2017-18 international free agent class.