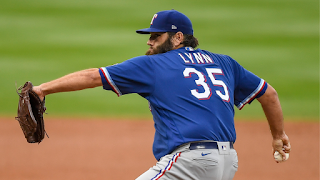 The Chicago White Sox have acquired RHP Lance Lynn from the Texas Rangers in exchange for RHP Dane Dunning and LHP Avery Weems.

After Lucas Giolito and Dallas Keuchel, the White Sox have an inexperienced rotation. Dunning, who they give up in this trade, was their third best starter last year by ERA, although that was in just seven starts. Lynn is one of the more underrated pitchers of the past decade, and his ERA has reflected that. Lynn's strikeout renaissance over his two years in Texas led to his fifth and sixth place finish in Cy Young voting in 2019 and 2020, respectively. His cutter was great against left handed batters in 2020, with a .118 average against, a big improvement on the .295 average versus lefties from 2019. While his age might not be ideal, and he is only signed for one more year at $8 million, Lynn will create a forceful top three with Giolito and Keuchel. If it is Dylan Cease and Reynaldo Lopez behind them, that is fine, but I would like to see them add a veteran starter in free agency, along the lines of what they did with Gio Gonzalez last year. The price for Lynn is high, but the White Sox are in a position to make a run this year, and Lynn helps them do that.

The rebuilding Rangers saw Lynn and Mike Minor flourish and 2019, and held on to both of them instead of selling high. It didn't work with Minor, who had a 5.60 ERA in seven starts in 2020 before being dealt to Oakland for two prospects not ranked in the Rangers' top 30 by MLB Pipeline. Lynn had a good 2020 though, and the Rangers don't want to risk his value plummeting. They get a nice return here, in Dunning, who the White Sox originally acquired from Washington in the 2016 Adam Eaton trade, who the White Sox conveniently brought back via free agency today. Dunning has grown as a prospect since then, and had a nice first MLB season in 2020. He is now ranked by MLB Pipeline as the Rangers' 3rd best prospect, and the 98th best prospect in all of baseball. He should play a pivotal role in the 2021 Rangers rotation, which really besides Lynn and rookie Kyle Cody. A 6th round pick in 2019, Weems was not ranked by MLB Pipeline, but had a nice Rookie League debut.